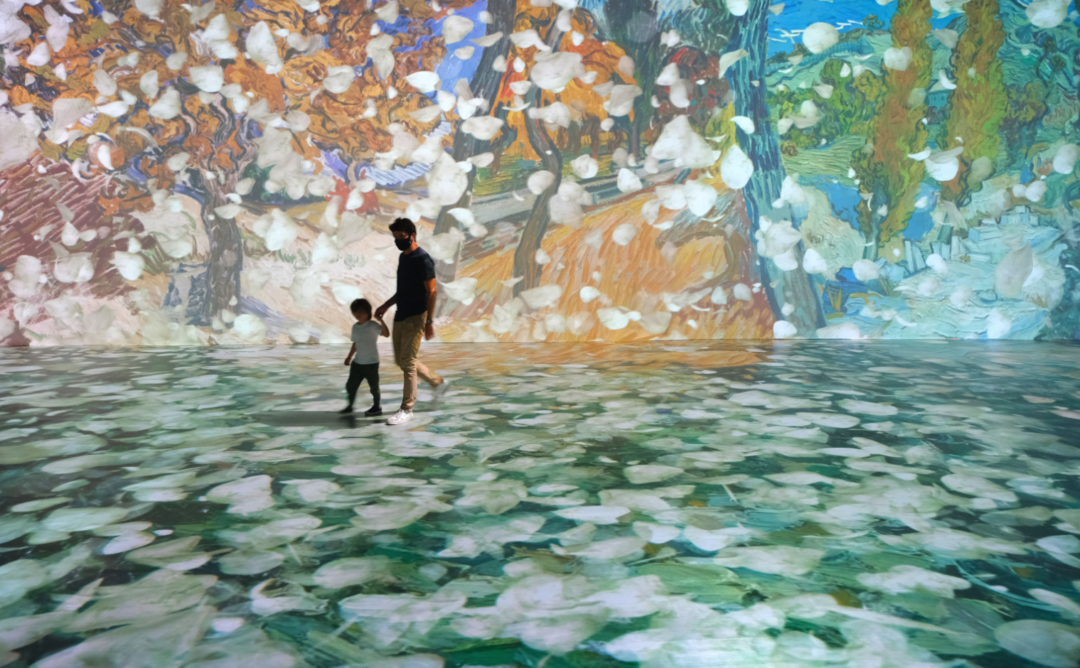 Art Review: “Beyond Van Gogh” at the Oregon Convention Center

If I want to be an art critic who complains about the immersive Van Gogh exhibits, I’m late to the party. The offerings have already been skewered in the press; the most common complaint compares the experience to stepping into a Van Gogh screensaver.

Is the experience like stepping into a screen saver? Yes. Is Van Gogh’s Life Story Reductive and Sweet? Yes. Do I find the minimum ticket price of $ 36.99 (plus $ 12 for parking) absurdly high for what the experience offers? Yes. Does the soundtrack of this experience include (no kidding) instrumental versions of “America” ​​by Simon and Garfunkel and “Starry Starry Night” by Don McLean? Yes. Was the overcrowded gift shop an annoyance, including a t-shirt with a self-portrait of Van Gogh paired with a multi-colored gauzy tutu? Yes.

Does all of this matter? No.

People are going to flock to this thing. When I looked at Yelp reviews of Van Gogh Dives in general and the specific iteration seen in Portland, the consensus from people other than art critics is overwhelmingly positive. The bottom line is, in the words of a Yelp reviewer, “LOVED, LOVED, LOVED”.

So if you are going to go there, at least be clearheaded. This show is not intended to appreciate the work of Van Gogh. It is not a matter of understanding fin-de-siècle European painting. This show uses these things to shape a show that sells tickets.

No one goes to Disney On Ice hoping to find out more about Hans Christian Andersen or the Grimm brothers. They go to Disney on Ice knowing that every narrative is tangential and has been rocked and dragged through so much popular culture that the “show” bears little relation to the original. They go there because they appreciate the showmanship and expect their children to be hypnotized. They know they are signing up to spend two hours looking at trade literature on ice skate binge drinking. It’s the same as that, except without the ice skates.

In the first few minutes of my conversation with the show’s commissioner, Fanny Curtat, she followed the party line. She signed on to be the curator of the exhibit because she wanted to ‘tell Vincent’s story’ for people who ‘may be intimidated by a museum but want a connection to Van Gogh’. Curtat gushed about Van Gogh’s correspondence with her brother and explained that she wanted viewers to be able to “get beyond the darkness of the myth… and the incident that cut off her ears.”

Curtat is charming; her French-Canadian accent helps. If you’d like to hear him talk about the show, check out Dmae Lo Roberts’ episode of “Stage and Studio” from November 24th.

I politely listened to Curtat’s enthusiastic spiel for a good eight minutes before launching into the series of questions I wanted to pursue: How does she reconcile Van Gogh’s anti-capitalist sentiments with a shameless capitalist spectacle like “Au- beyond Van Gogh ”?

Curtat, to his credit, did not miss a beat and replied that Van Gogh “wanted to succeed”, because he did not want to live on his brother, and even if he struggled, at the end of his life. , he was getting “traction” in the art world. She referred to an essay by critic G-Albert Aurier written in 1889 which spoke favorably of Van Gogh’s work, calling him an “alchemist of color and genius of light”.

Van Gogh as a struggling artist is part of the artist’s myth. He did not sell paintings during his lifetime and only became famous after his death. The hold this has on the collective imagination is well expressed in this clip from an episode of “Dr. Qui” in which Van Gogh travels through time to see an exhibition of his work in a gallery in the future. It’s emotionally manipulative schlock, but it absolutely works. I cried. We want to see this artist understand how well his works are received today. The part of Van Gogh that is not as emphasized is the fact that Van Gogh wanted to get out of the buying and selling system altogether.

Van Gogh didn’t want his brother to have to support him, but more than having enough money to “be comfortable” or join the bourgeoisie, he wanted to avoid the need for money altogether. He wanted to be a preacher among the peasants in his youth, and even after giving up this vocation, he constantly expressed sympathies for the proletariat. He made several compositions of worker’s boots (none of them managed to become “Beyond Van Gogh”). He saw himself as a socialist and yearned to return to a mythical past of genuine social interaction and integrity. He strives to create a commune of artists. He wanted to use his paintings as part of a barter system.

In other words, I’m convinced that a digital screening of his paintings with tickets of at least $ 37 was not what he had in mind when considering success. The closest I felt to communicate with the artist in “Beyond Van Gogh” was looking at the screening of self-portraits and thinking, “I’m so sorry”. Then the animation kicked in, the portrait blinked, and the spell was broken.

Although Curtat was the art historian on this project, I didn’t get the impression that she was deluding herself that art history is the driving force. The show is a collaboration between animators, projection artists and investors and, ultimately, it is the latter group that governs what is ‘beyond’.

There are seven or eight immersive Van Gogh shows in circulation right now, precisely because Van Gogh’s work is extremely popular with audiences interested in paying for this type of experience (and the paintings are in the public domain). . The production company responsible for “Beyond Van Gogh” has already produced a second show soon to premiere in Miami, “Beyond Monet,” not exactly a edgy sequel.

Curtat called the choice of artists to focus a show on a “negotiation… we have to find some kind of middle ground between what investors are willing to get into and what would be artistically interesting.” She suggested a Georgia O’Keeffe show, but the idea was rejected because investors and producers “weren’t sure the turnout would be the same.” Other possibilities that Curtat brought up in our conversation were Dali, Frida Kahlo, Francisco Goya and Francis Bacon. Neither of these ideas was enlightened either.

Curtat concedes that “they are going to lack easy artists”. I would add that they are going to run out of artists who guarantee the sale of tickets. There are other methods of obtaining funding. There is a immersive Picasso exhibition now playing in Vancouver which is a collaboration between the Picasso estate and the production company.

Ultimately, Curtat believes these digital immersive exhibits will end up being thematic, similar to regular museum exhibits in which there is a theme and the screenings feature the work of multiple artists. For this to work, the ticket-buying public would have to give up our love of romantic biographies and pretty “easy” pictures.

Some contemporary artists are already using similar technology to create installations. Refik Anadol Uses AI to Create Room-Size Facilities. The Portland Mobile Project Unit, founded by Sarah Turner and Fernanda D’Agostino, could do incredible things with that kind of budget and resources. I even remembered that of Ragnar Kjartansson Visitors, and would be fascinated to see something like this work transform into an even more immersive experience. However, using the work of contemporary artists would reduce the profits. They should pay the artists and, let’s be honest, these artists don’t have the same cachet as Van Gogh or Monet.

I attended the press preview and then a week later took my seven year old daughter. Our outings have been limited lately, and I thought she would take advantage. We skipped the biography panels, weaving and cutting through the line of spectators following the selective account of Van Gogh’s life, and went straight to the screening room.

My daughter was hypnotized. Looking at his wide eyes, I realized that to denigrate this as a screensaver is to overlook the accomplishments of the animators, who really did a great job. Her favorite part was what she called “the cast”. When the show is separated from Van Gogh, enjoyed as a show far removed from its point of origin, it is captivating.

Swirling digital projections are almost as far removed from easel paintings as costumed ice dancing is from literature (or even animated film). Starry Night measures 29 x 36 inches; most of Van Gogh’s works are this size or smaller. There are historical paintings that were meant to be immersive, baroque ceilings for example, but the thrill of being engulfed or submerged on which these shows are based was never part of Van Gogh’s equation.

Curtat hopes people will see this exhibition and be motivated to look for genuine Van Gogh paintings in museums. This seems to me to be a recipe for disappointment: the paintings will not dominate the viewer; they don’t move, swirl, or blend in with anything else. The flashy exuberance of digital swirls and fades is nowhere to be found in The ox cart at the Portland Art Museum, even dramatically absent. There is value in looking at a painting (even in a reproduction) and there is value in looking at the art of digital projection, but it is misleading to equate both or to claim that the latter enriches the art. first.

So go to “Beyond Van Gogh”, but don’t buy into fiction that this is a true representation of the artist, certainly don’t assume that it goes “beyond” everything Van Gogh myth. Go either completely ignore the element of Van Gogh’s biography, or appreciate the myth of Van Gogh as a contemporary cultural phenomenon, which we have created, shaped and perfected based on what we want to see and believe.

What annoyed me about “Beyond Van Gogh” was the attempt at sincerity, the assertion that the show was firmly attached to Van Gogh as a historical figure and his work. Freed from that weight, it was a perfectly charming, albeit expensive, thing to do with my child.

Even more ardently than Van Gogh wanted out of the capitalist system, he wanted a human connection. Fifteen years of correspondence (all accessible online thanks to VanGoghletters.org) with his brother confirms this. So while I imagine Van Gogh would be sickened to see the story of his life and his struggles boiled down to a series of panels that tell a sensational story, perhaps he would be comforted that 130 years later his paintings, although tumbling into the juggernaut of popular culture, created a spectacle that brings people together. He would still hate tickets.

2021-11-30
Previous Post: “Picturing Motherhood Now” is a must see exhibition in Cleveland
Next Post: Revue d’art: Cathy Cone superimposes the past and the present in “Once upon a time” at the Minema Gallery | Art review | Seven days