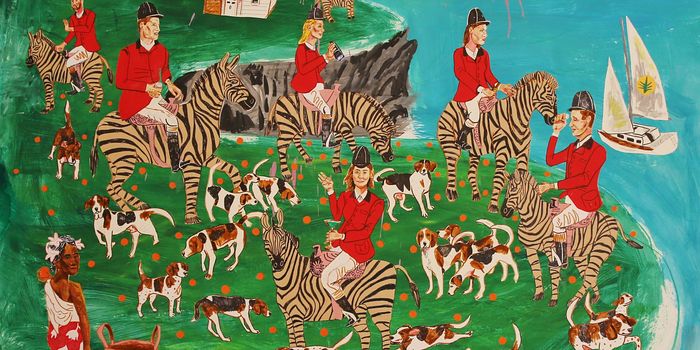 Art Review: Art in Stereo, a Languid Hot Dog, and Something in the Sand

From the ready-made “Bottle Rack” (1914) by Marcel Duchamp to the accumulation of suitcases stacked against the wall by the Japanese artist Chiharu Shiota entitled “Searching for the Destination” (2012), we see that a certain kind of he artist works on the principle that around us there are countless unrecognized works of art. All that is necessary to bring them to our attention, they think, is to take them out of their original context and place them in a gallery environment.

With Gabriel de la Mora (born in 1968), an architect who turned to art and graduated with a master’s degree in fine arts in photography and video in 2003, beautiful framing and, in the case of this exhibition, a masterful installation are also required. Mr. De la Mora, who finds his equipment in thrift stores in Mexico City, collected 55 pairs of stereo speaker screens and mounted them, framed.

In a minimalist way, there is something for everyone in this exhibition: for typical curators, a serious capital S of a grid configuration of the hanging; for fans of 1970s retro, lots of beige fabric with gold thread; and for cultural archaeologists, the ghosts of the speakers themselves imprinted on the fabric. Mr. De la Mora has a knack for combining visual elegance with the increasingly required suggestions of social meaning from art. Here, the balance works.

“Hello,” says the sympathetic artist’s statement on the gallery handout. “Please sit where you want. It’s probably a hot summer day and it’s easy to get tired. The works in this exhibition feature a figure in postures of rest. Each piece explores expressions and gestures of a body, in reflection or relaxation, at a time when bodies and the interiors they express have become a political issue.

Ivy Haldeman (b. 1985) remembers the inspiration for this work: “About five years ago I was living in La Boca in Buenos Aires… One day I came across this mural on the side of my a bodega. It featured chips, soda, and a hot dog with eyelashes and high heels. It was very charming, so I decided to come back with my camera and take her picture. When I finally got back there, maybe a week later, the bodega had burned down, taking with it the mural and the high-heeled hot dog.

Mrs. Haldeman’s own phallic yet effeminate frankfurters with arms and legs are nestled in various poses inside fluffy hot dog buns – humorous symbolism that needs no elaboration. The style of these small acrylic on linen paintings could be called Francis Picabia lite, because the cartoon lines are a little too graceful, the palette (white, yellow, peach, orange and brown-red) harmonizes to a fault, and the subject only sexy enough. The paintings would be much better if they were a little worse.

Peyton Freiman (b. 1983) is either an impressive all-rounder, a bit of an operator, or a bit of both. A Tennessean emigrated to Brooklyn, Mr. Freiman is a writer whose words appeared in the hip magazine The Wild, and an actor appearing in an Austin, Texas-based web series called “Master Class.” On screen, Mr. Freiman is a nerdy, likable fake, one or two thorns away from qualifying to host “The Daily Show” if Trevor Noah falters. Here, he is a painter-installationist of considerable talent.

Mr. Freiman’s immediately preceding offer was a seven-hour exhibition, “Stoned Summer”, at a design studio in Williamsburg, during which the first 20 people who showed up received “a special gift”. The artist has a soft spot for stoner-surfer culture (or at least a condescending idea of ​​it – his statement on the website says he paints “clueless white stoners”) and has, by force, covered the gallery floor of beach sand and dropped into the middle, the ersatz ruins of a campfire festooned with empty beer cans and plastic cups.

The irony is that Mr. Freiman’s faux street art paintings – a colorful cross between punk travel posters and covers for The New Yorker – are actually quite good: crisp, bouncy and graphically inventive, even if they’re a little stuffed with hand-printed labels. . If Mr. Freiman has not yet made a definitive career choice, that of visual artist should still be in the running.

-Sir. Plagens is an artist and writer in New York.