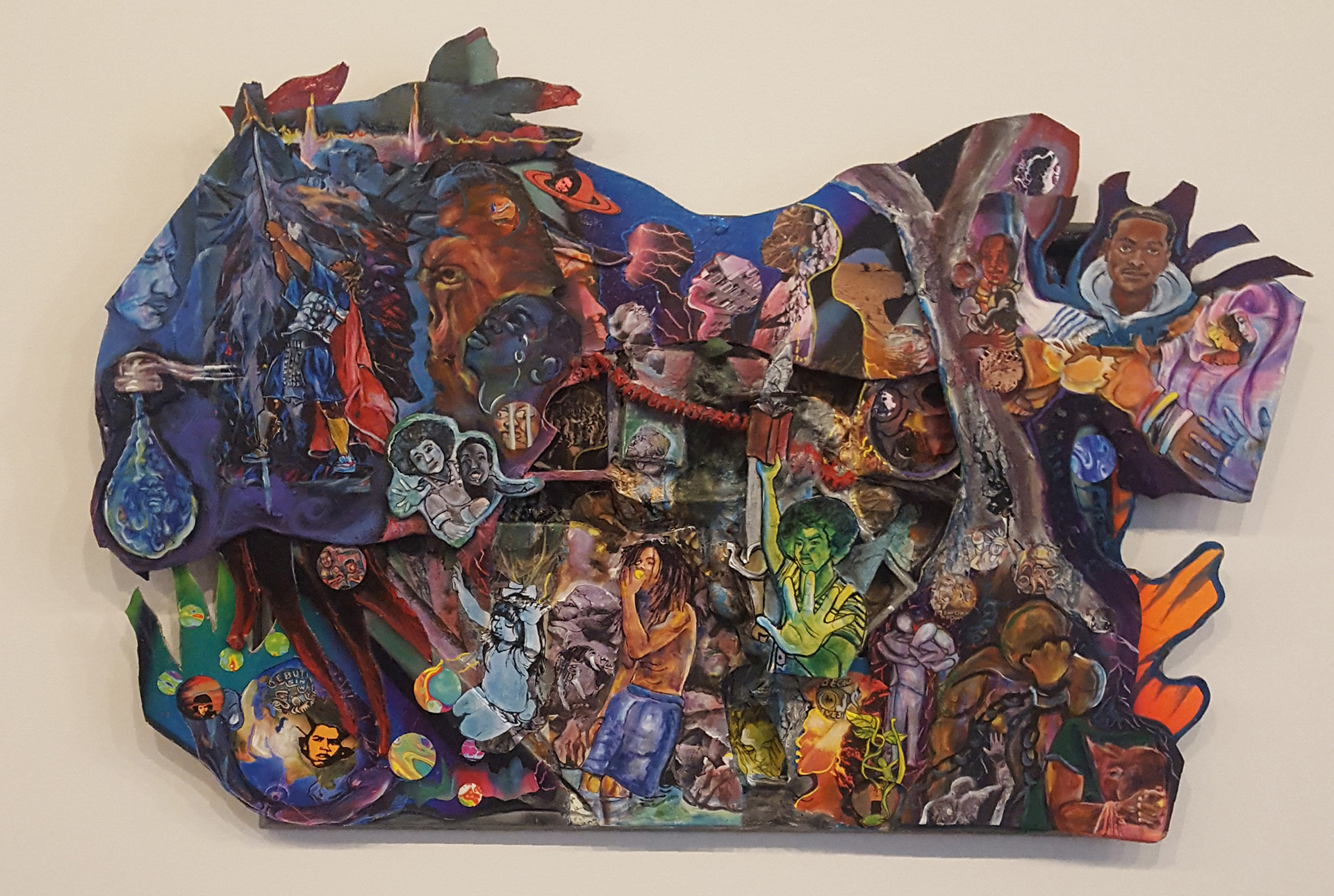 Art Review: An American Sunrise at the Vanderelli Room

An American sunrise presents the first exhibit inside the Vanderelli Hall since March 2020. While that alone is cause for celebration, the show itself (along with its impeccable timing) is what will likely be praised and remembered. In An American sunrise, Curator AJ Vanderelli has compiled a thoughtful, timely and cohesive collection of works by local artists all united around the themes presented in Joy Harjo’s poem”An American sunrise.” It’s a show that highlights a wide variety of American experiences and invites us to celebrate them all.

Functioning as a reboot of one of Columbus’ most famous art venues, the exhibit also comes at a time when our country is embarking on its own recalibration. We emerge from a long night of divinity and violence and move forward with the hope of better days. For a clear majority of Americans, there is at least tentative optimism about the future.

Of course, as Amanda Moore rightly points out in his commentary on Harjo’s poem, “there is not a single American sunrise.” Literally, the American sunrise spans a continent. It spans multiple time zones; increase for some sooner than others. Metaphorically, it’s the same thing. The light of an American sunrise did not reach everyone at once. In fact, many in America are still waiting for their sunrise.

While Harjo’s poem is more specifically grounded in the experience of Native Americans, her observations provide a window into the experience of all marginalized people struggling to find a place in America. It is these groups that are particularly well represented in the exhibition. An American sunrise.

Harjo’s poem opens with a line, “We were out of breath, as we ran to meet each other.” It’s a line that could just as well serve as an introduction to this exhibition. Yes, we are tired, yes we are out of breath, but here, in this space and among these works, we have a chance to rest and reflect. We have a chance to meet, and just as important, meet.

Richard Duarte Brown When the rocks scream presents a kaleidoscopic assemblage of human emotions and experiences. (See feature image.) Assembled like a collage, these individual representations connect and merge to create a swirling cosmic universe. Brown’s powerful work recognizes both our connection to each other and the understanding that together we are part of something much bigger.

Mixed media piece by Lisa McLymont An American Sunrise Natives and Immigrants in Cages, Oh My juxtaposes the promise of an American sunrise with the harsh reality of American politics. The staring eyes scan the red and white bars of the flag, while the stars on the blue field of the flag are replaced by barbed wire. Taking the flag as his starting point, McLymont joins a famous list of artists (including David Hammer, Barbara Kruger and Aaron Fowler) who altered our nation’s most enduring symbol of freedom to illustrate a darker reality.

Liv Barney and Stephanie Rond collaborated on the wall installation, The Sunrise Generation. Playing on our propensity to segment groups by generation (Baby Boomers, Gen X, Millennials, etc.), their work seeks to acknowledge the history and traditions of Native Americans while acknowledging the essential role that each new generation plays in honoring these traditions while facing the future.

Other works carry the message of diverse traditions and interdependence further. With Sister Thomas Swanson Tribute to May Angelou incorporates the late poet’s words into a stark landscape reminiscent of Japanese landscape paintings. Paisha Thomas’ glazed stoneware invokes the power of the Oya, the traditional spirit of the Yoruba religion. by Linda McClanahan Romulus and Remus presents an allegory of the pop culture of early 21st century America.

In Harjo’s poem, the voice she uses is one of inclusion. Whether observing that “we were running” or wryly suggesting that “we were pagans”, Harjo ensures that the reader feels part of the events. In this spirit, and towards the end of the poem, Harjo calls us and calls us to action, saying that, whether 40 years ago or 400 years ago, “we still want justice”. It is a powerful reminder that our American sunrise is shining with the light of justice shining on all.

Group shows are a tricky thing; unwieldy and often disparate. In An American sunrise, AJ Vanderelli has curated a selection of works that find a common thread through very different experiences. Moreover, they are works that speak to the pivotal times in which we live and, with clarity and confidence, point to a common path for all of us to follow.

An American sunrise is on view at The Vanderelli Room, 218 McDowell St. in Franklinton, from January 1, 2021 through March 19, 2021. Click here make an appointment to visit the exhibition.

All photos by Jeff Regensburger