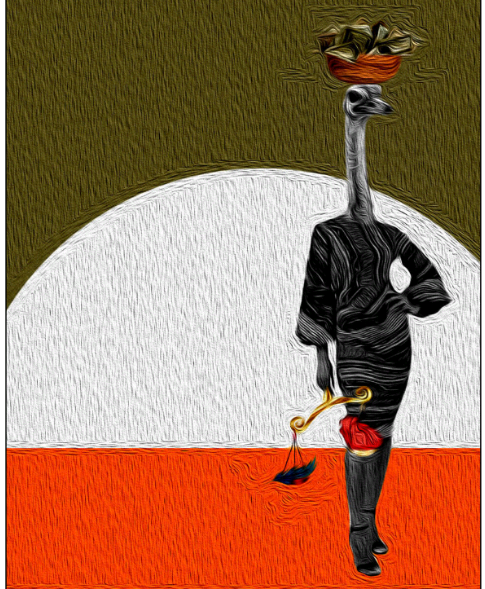 They say dreams are doorways into our subconscious, similar to how our eyes serve as windows to the soul. We are not our minds, they say; and our dreams manage to capture the realities we flee from or the ideas yet to be formed.

This puts the concept of dreams in an interesting place, they can either lack meaning or tend to be deep and revealing. Digital painter, Adedeji Akinkunmi in the project ‘A Strange World’ offers his own interpretation on the age-old question of what is seen when the subconscious is questioned.

“A Strange World,” entirely crafted by Adedeji, is a sharp, sinister, and bizarre encounter with things we think we’ve become familiar with. A disturbing experience of surrealism, it opposes ideas to each other to arouse emotion. These range from despair, to comfort, to royalty, to fear. Adedeji’s works prefer to unravel when viewed. It rewards second glances for those looking to find new stories in it. They are non-linear and strange; it’s all just a dream. Adedeji attests to this in a conversation with Flux Review.

The artist, who is Nigerian, bases the painting on a staging through clothing. The finery retains a certain traditional charm; it’s African, it’s Yoruba. The subjects of the works wear different styles of Yoruba clothing. Male figures wear Agbada, buba, shoro. Women wear Aso-oke, which represents femininity. One of the works, named ‘The Trade’, had an ostrich wearing ‘Oleku’; a top and a short skirt synonymous with youth. The ostrich holds a scale; and on his head is a basket of money. The face of the Ostrich is impatient, she is waiting. Another image, simply titled ‘Portrait’ shows a goat wearing iro and buba, she completes her look with an irukere (horsetail). It shows power and influence. There is strength in this painting.

The texture of the work swirls, as if it were a delicate subject in stasis, preserved in water through time. This gives the room a certain dreamy or nightmarish aesthetic. It melts the more it is inspected.

Adedeji embeds metaphors in his works. A common question raised by watchers would be “Why animal heads?” This pattern is almost reminiscent of ancient Egyptian tradition. As Anubis had a Jackal for his head; his brother Wepwawet, a wolf. Horus has a bird. Parallels exist between these and “A Strange World”. The ancient Egyptians drew hieroglyphs on their walls for trade and then began to document their history; vital parts of Egyptian culture and religion. However, artists have chosen to interpret members of their religious pantheons with some leeway when it comes to creative expression. They use animals that represent the dominant character of these gods to replace their actual heads. As the text of the coffin in the tomb says, “Only the dead can know the true forms of the gods”. They therefore opted for what is considered a therianthropic approach to representation – replacing human heads with animal parts. 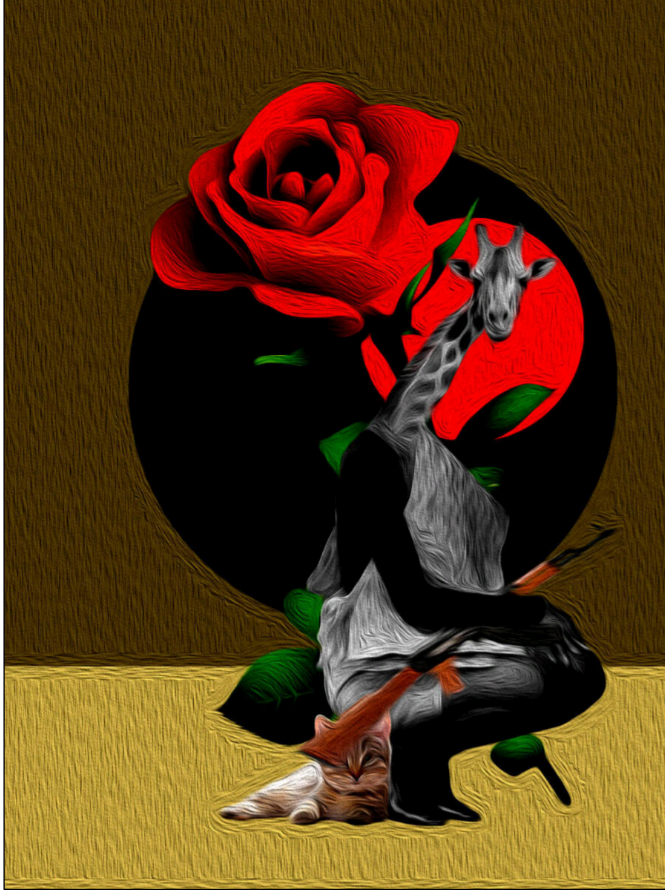 Various animal heads surface in this project. A stallion represents the integrity that resides in masculinity. Le Pic tells about motherhood. Eagles embody most of the women in construction. Adedeji uses the giraffe to represent beauty, but he places a gun in his hand and a cat next to it. One of them has a suckling Rooster. It’s a lot of chaos and confusion. The more the works are dissected, the more their meanings recede. Like a fresh dream, brightening when memory reaches out to seek it.

It brings different scenarios from the Nigerian experience and immerses them in a surreal environment. One of the artworks depicts three women wearing ‘Aso Oke’, a basic Yoruba attire for the festival. They walk along a black backdrop. Women have bald eagles for heads. Two of them are carrying purses, and one is holding a noose that drags a baby by the neck. Almost reminiscent of the Three Witches trope, popularized by Shakespeare’s Macbeth and supported in Nigerian lore. The one in the middle is looking at you. It destabilizes. 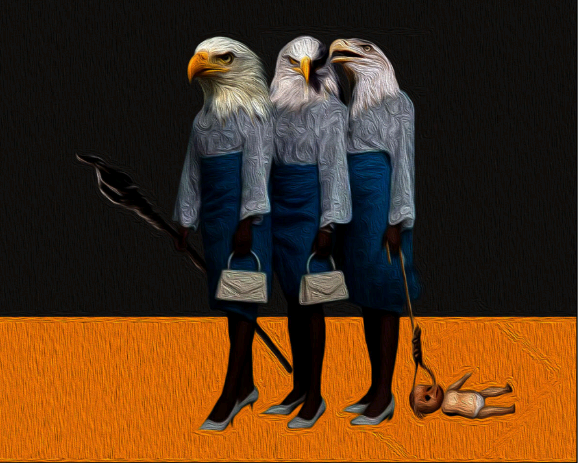 The painter’s works have been exhibited on various platforms, one of which is the German digital art platform, Kunstmatrix, who liked it so much that they decided to feature the works on the homepage of their site. website. It’s really no exaggeration why these works would resonate so much with people born outside of Nigeria, or even Yoruba culture. These are paintings that evoke strong feelings when unraveled. Sometimes we feel a conflict within the works; but then conflict is the way of man. And according to Adedeji, our subconscious treats it that way. 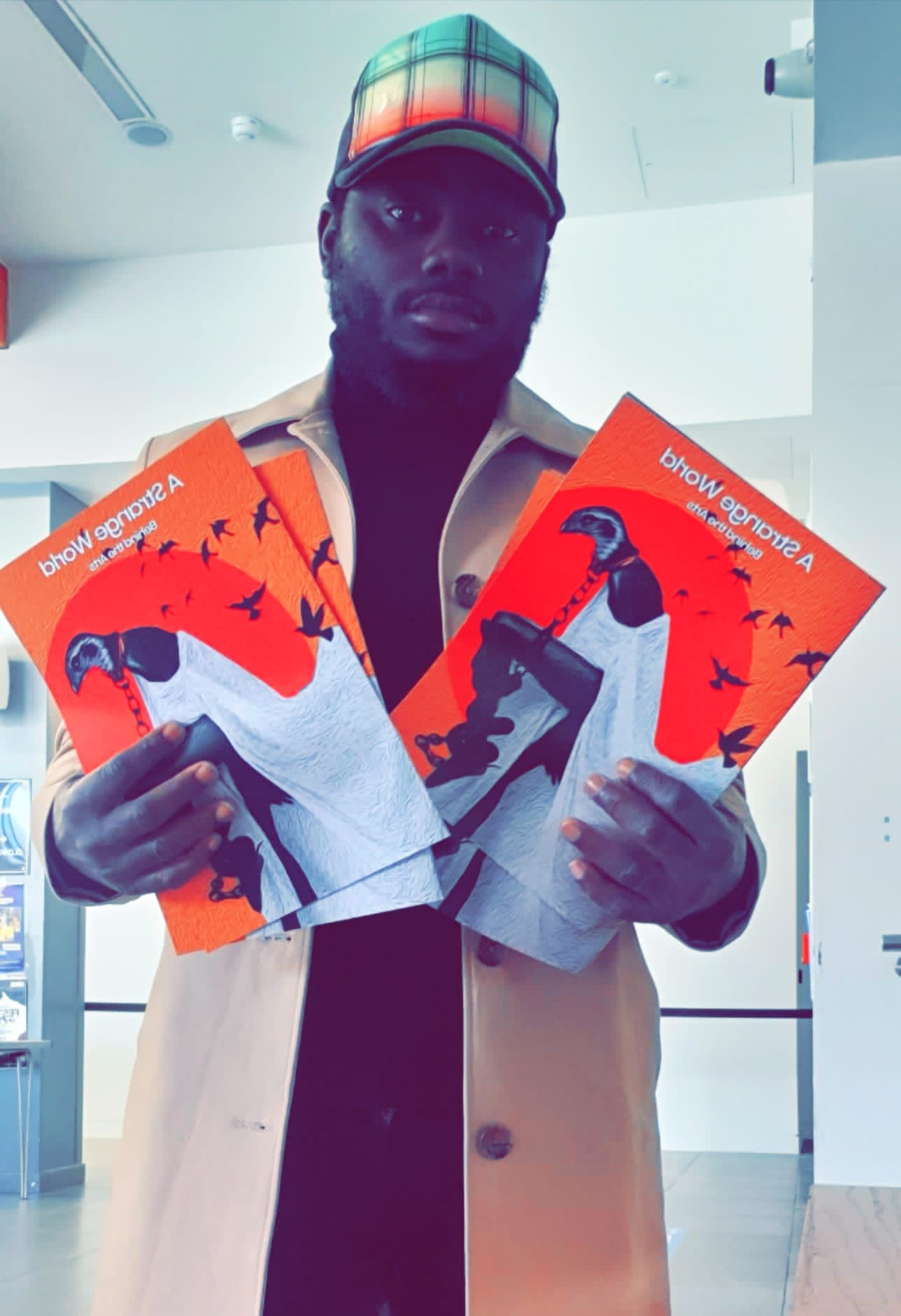 About the writer: Oyedele Alokan is a writer, strategist and editor. He loves art, music and culture. Follow him on social media, @deelokz_, the drinks are on him.

2021-08-11
Previous Post: Art review: two galleries attract viewers with a multitude of experiences
Next Post: A work of art in colorful fabric to put the municipal center of Saint-Charles in a new light