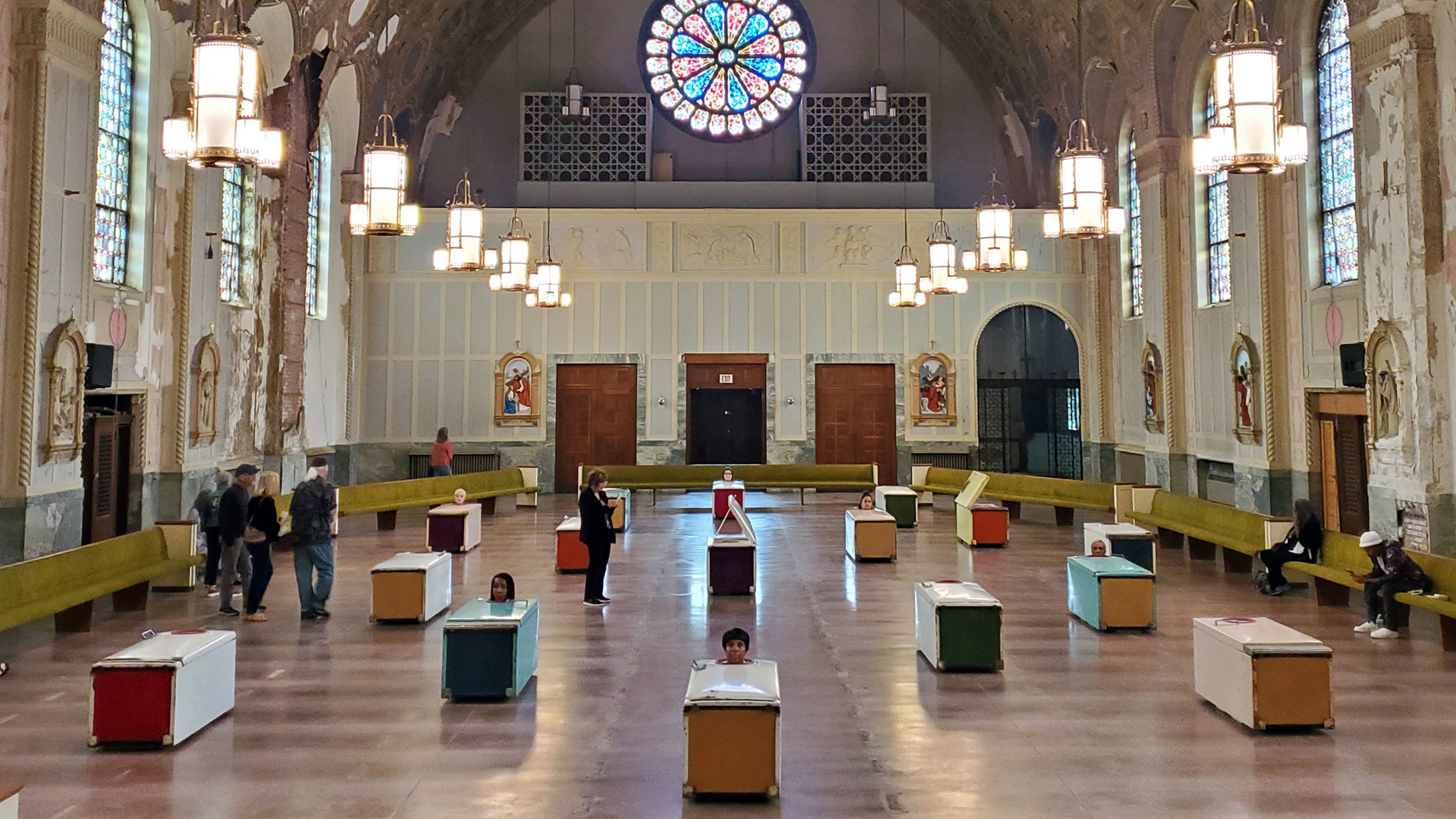 Art review: a “truly miraculous” experience at the Requiem

You will forgive those of us tasked with writing about art if we have a little trouble describing the work of Malcolm Cochran. Requiem. It is, on the face of it, a work that resists categorization to such a degree that even the simple act of stating what it is is sobering.

Is it sculpture? Yes. Is it installation? Yes. Is it performance? Yes. Is it a ritual of potentially sacred variety? Yes, that’s it too. It’s all of those things, and probably a few that I haven’t thought of, those are the layers they contain. Fortunately, the program notes provide help here, referring to Requiem as “the artist’s first sculptural installation to incorporate live music…” For the sake of brevity, let’s go.

Knowing now that Requiem i.e. we can turn to how it is presented (and please bear with me here).

There is an empty church in the South of Main neighborhood, east of Columbus. It started in 1916 as Holy Rosary Catholic Church, was sold to Rock of Faith Baptist Church in the 1980s and is now vacant. It has seen better days and is perhaps a little crumbly in places. The benches have disappeared; the same goes for accessories and ornaments that were not attached to the building itself. The paint is washed out and the plaster cracked, but the spirit of its architectural intent remains intact.

It is still a church, built to inspire and, even in its current state, able to do just that. In that way, it feels a lot like the kind of church a group of brave survivors from a post-apocalyptic novel might fall into; find themselves in their shelter at the precise moment when all hope seems lost. It is a church from which strength could yet be drawn, showing this same motley group a way to persevere somehow.

Arranged in the cavernous, barrel-vaulted nave of this church, is an assortment of vintage refrigerators; many in bright vintage colors. They lie on their backs and, being so configured, would evoke coffins or sarcophagi even before one notices that the interiors are indeed outfitted to resemble coffins.

A single perfectly round hole is cut in the door of each refrigerator. It is through these holes that the performers’ heads protrude as they sing a variety of mournful a cappella songs. Some of the refrigerators contain performers. Some don’t. All contain functional bulbs. The metaphorical meaning of these light bulbs could form the basis of a thousand-word think piece for any number of enterprising writers.

The performance itself lasts maybe 45 minutes. It also transcends time. A range of vocal pieces ranging from contemporary to traditional to historical are presented. Each hits like a punch in the stomach.

The experience is beautiful, bewitching, disorienting and devastating at the same time. It’s out of the body, otherworldly and not to be missed. That the artist and performers, in tandem with the space they occupy, can craft such soaring magic out of discarded apparatus, a crumbling church and wordless intonations borders on something truly miraculous.

Malcolm Cochran originally envisioned Requiem as a memorial to the victims of genocide, massacres and war. At the start of the play (circa 2016), the salient points of reference could have been Chechnya, Darfur and Sri Lanka. Today, the list of disasters and atrocities has sadly grown to include a global pandemic, weather-related disasters, a war in Ukraine, and a series of well-documented and ongoing assaults on marginalized peoples in the United States. United.

The fact that all voice selections are wordless acknowledges the universality of suffering.

The fact that all performers are women recognizes the harsh reality that grief, loss and pain (especially in the case of war and sexual violence) are disproportionately borne by women.

The fact that this work is presented in a long-neglected neighborhood recognizes that the large-scale human suffering caused by social and political injustice is not confined to other countries and other lands.

Cochran states that Requiem is not presented as a balm. It’s not a resolved grief. It is not a crescendo of voices that lifts us towards a cathartic outcome. It’s more of an uncovered grief. And that may be enough. Perhaps, in its ruthless way, the power of Requiem lies in its ability to help us see suffering with such unwavering clarity that we could pause and say, “It’s not anymore.” Perhaps, like that motley band of survivors in a deserted church, Requiem is there to simply provide the time and space where we might find a way to persevere.

Go see it, we’ll find out together.

Requiem is free, open to the public, and played on consecutive Sundays from September 25 through October 23 at Rock of Faith Baptist Church, 1667 E. Main St. in Columbus.

The program starts at 2 p.m. and doors open at 1:30 p.m. Registration is not required.

The remaining performances are scheduled as follows:

For more information on Rock of Faith Church and the South of Main Community Development Corporation, visit rofcdc.org.

For more information on the history of the Holy Rosary Church campus, visit columbuslandmarks.org.