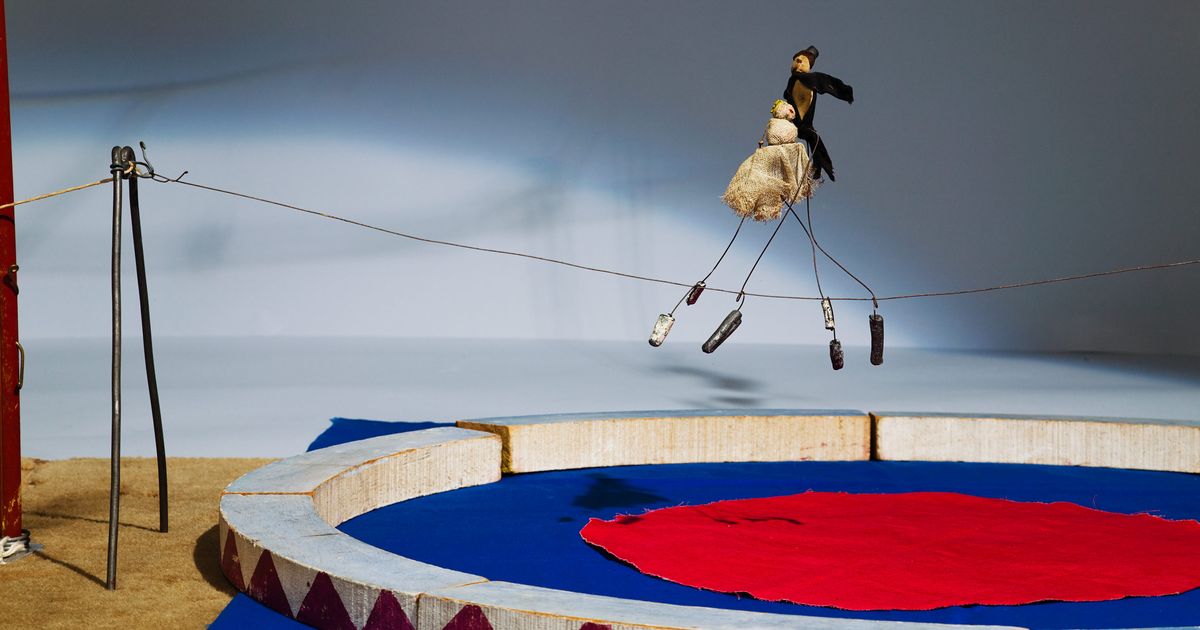 Treats roll out of the Whitney Museum of American Art like clowns out of a Volkswagen. Discover his reinstallation, on view June 28, of one of the most beloved, amusing and radical works of 20th-century American art: the completely renovated work of Alexander Calder, transcendent Circus. Made between 1926 and 1931, when Calder, the son and grandson of artists (his father carved the George Washington on the Washington Square Arch, his grandfather the colossal statue of William Penn atop the Hall of city ​​of Philadelphia), was in his late twenties and early thirties. , living in Paris and hanging out with Picasso, Miró, Mondrian, Léger and all the other European modernist heavyweights. In Circus – probably the best of his many great works and a pioneering piece in a style that I think could stand the test of time better than a batch of other already moldy modernist styles from the 20th century – Calder takes on a linear form using everyday materials like wire, fabric, cork, tubing, pliers and hammers, alchemically merging all of this with aspects of cubism, Dada, surrealism, collage and art. ‘Assembly. This shows that Calder was among the very first to create both kinetic art and performance art. And the whole of Circus possesses the aesthetic thermodynamics of a promised land that indirectly influenced hundreds of artists, making Calder one of the most important of the 20th century.

Circus consists of an encyclopedic set of Whitmanesque toy-like sculptures that resemble incubi, fairies, strange inventions, mousetraps, gadgets, puppets, and Rube Goldberg-esque contraptions. Once upon a time, all of these moved, performed, bounced, flew through the air or danced on the ground. Calder, acting as ring master, would arrive with his suitcases full of stuff, unfurl and build his marquee and, one by one in front of a delighted audience, whistle, ring bells, bellow and roar while his wife played records rumba and foxtrot to a nearby Victrola, both bringing Circus to spooky life.

At the Whitney you can see the lion and its trainer, who used to put his head in the lion’s mouth or make the beast sit; the flying trapeze artists who swung in the air and twirled from ring to ring; the small horse the rider would ride and ride around the ring; camels, clowns and cowboys riding and throwing other animals; chariot racers; tightrope walkers running back and forth along a high wire that Calder would tilt from side to side; the bearded woman and the dancing bear; dogs standing up or dancing; the elephant that gently pretends to sit on its trainer then carefully gets up to finally stand on its hind legs; and the doves that would land on the pretty prima donna’s arms as she serenades the crowd.

Because everything here is infinitely fragile, Calder’s Circus can never be animated again. (Though I imagine allowing a one-time exception for Beyoncé as guest puppeteer and emcee, leading her particular kind of buzz.) Fortunately, the artwork is set in a panoramic configuration, rather than the old circular formation which made seeing it a bit difficult, so you can walk through this sculpture and create your own movie in your head. Also at your fingertips is a wonderful film of one of his later performances: see the gruff older Calder as a master artist moving the creatures around and throwing them around while looking down from his bird’s-eye view. bird, making sounds and barking commands in its foretaste. custody, chimerical daydreaming and entertainment.