Artist Axel Stohlberg finds endless inspiration in the standard shape of a house – a square or rectangle with a pitched roof. There is no need to read a deep philosophy in this choice, he said; in his work, the house represents what many might expect: a nest, a shelter, a security.

The shape of the house is so important to Stohlberg’s work that it became a signature motif for the 68-year-old Middlesex artist. Not that he didn’t try to go beyond it. In an interview in 2010, Stohlberg said Seven days that his exhibition at the TW Wood Gallery in Montpellier was a swan song for the house. For a while he focused on other subjects in his painting, drawing, sculpture, collage, and assemblage. But the house kept coming back.

The image is at the heart of his exhibition currently presented at Axel Gallery and Frame Shop in Waterbury. (This name is no coincidence: Stohlberg owned the company for 30 years before selling it to Whitney Aldrich in 2013.) Entitled “Structures”, the exhibition includes 29 works on the theme of the house. The nine material fabric sculptures and nine wooden wall reliefs have already been exhibited; the 11 framed collages do not have.

None of the works are titled. Why? “I thought maybe they could fend for themselves,” Stohlberg said after thinking. “Maybe the viewer can find something for themselves.”

Working with material fabric – a stiff wire mesh with small square holes – is relatively new to Stohlberg, who first discovered the material a few years ago. He likes to create a three-dimensional structure through which you can see an object – glass, kindling, a mirror – which he put inside.

Despite their lack of titles, each table sculpture represents something for Stohlberg. In one, a piece of hardware fabric painted blue is placed inside a large rectangular building. It’s a blue wave, he said.

Near the front of the gallery, a similar shape constructed from material fabric is filled with four-inch stacked glass squares. While building this piece, Stohlberg said, he discovered that the glass pieces reflected different colors – green, blue, purple, pink – when light hit them. He loves the effect of water.

Perhaps the most significant sculpture here is the one that has a plumb bob hanging from the closed top. The pointy-tipped red weight is the same one Stohlberg used for a plumb bob when building his post and beam house in Middlesex when he was 24. It was the house where Stohlberg raised his two children. “I am very proud of this house,” he said. “I was very attached to it.”

Eventually he sold the place “to a very nice family” and moved. Back in Middlesex now, he admitted it was “a little weird” walking past his old home.

The Stohlberg Collage Houses are cut from Bristol board, an uncoated cardboard named after the town in southwest England where it was first produced. He used a single-bladed razor and a straight-bladed cutting guide to create house-shaped silhouettes, which he then blackened with acrylic paint or china markers. Gray bristol board, used as the floor, was mounted with each house on white bristol board. Stohlberg then tangled and framed the collages.

Its wooden wall reliefs are cut with a table saw and a band saw. Stohlberg explained that he picks up pieces of spruce of different sizes – four by four or six by six inches – and just starts cutting. This is when the ideas come to him.

“I’m looking for angles that I like and I’m thinking of angles that will look good with a contrasting black,” Stohlberg said.

The black is gesso, which has a matte appearance. “I started using black gesso as negative space,” the artist said. “You get that void that contrasts with the light wood.” 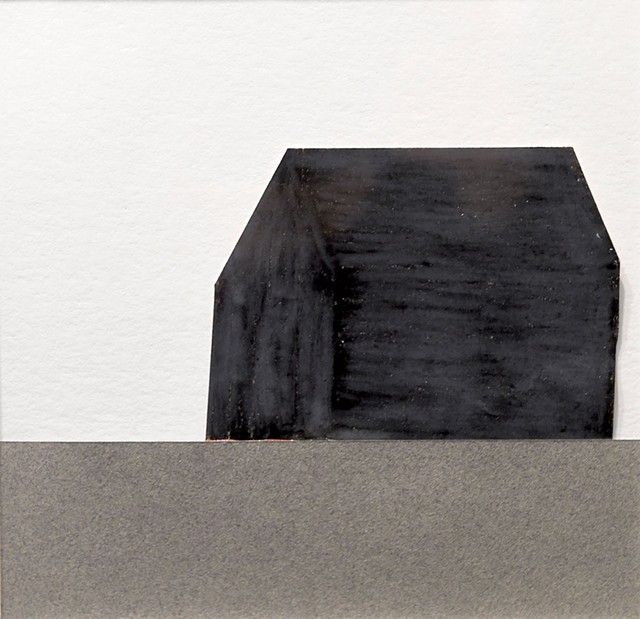 Commenting on a trio of reliefs hung together in the exhibit, Stohlberg said he thinks of negative space by cutting off the one on the left. “I liked the contrast, and how it does [the relief] more abstract, ”he said.

For the central relief, Stohlberg glued two pieces of wood, the one on the back forming a “shadow” of the one on the front. He was pleased with how the angles reflected the shape shown in the third relief, he said.

Stohlberg’s love for art goes back a long way – until he was 4 years old. “We always lived in the same house growing up; we never moved, and that was really important to me.”

Stohlberg believes that everyone can relate to the image of a house. “As soon as you see it, you know what it is,” he said. “No matter where you are in the world, you know this shape.”

But the implications of the form depend on the viewer – perhaps another reason he hasn’t titled his works.

“If you name something, it takes you into a story and ends there,” Stohlberg said. “When people come to see ‘Structures’, I want them to create their own stories from the pieces.”