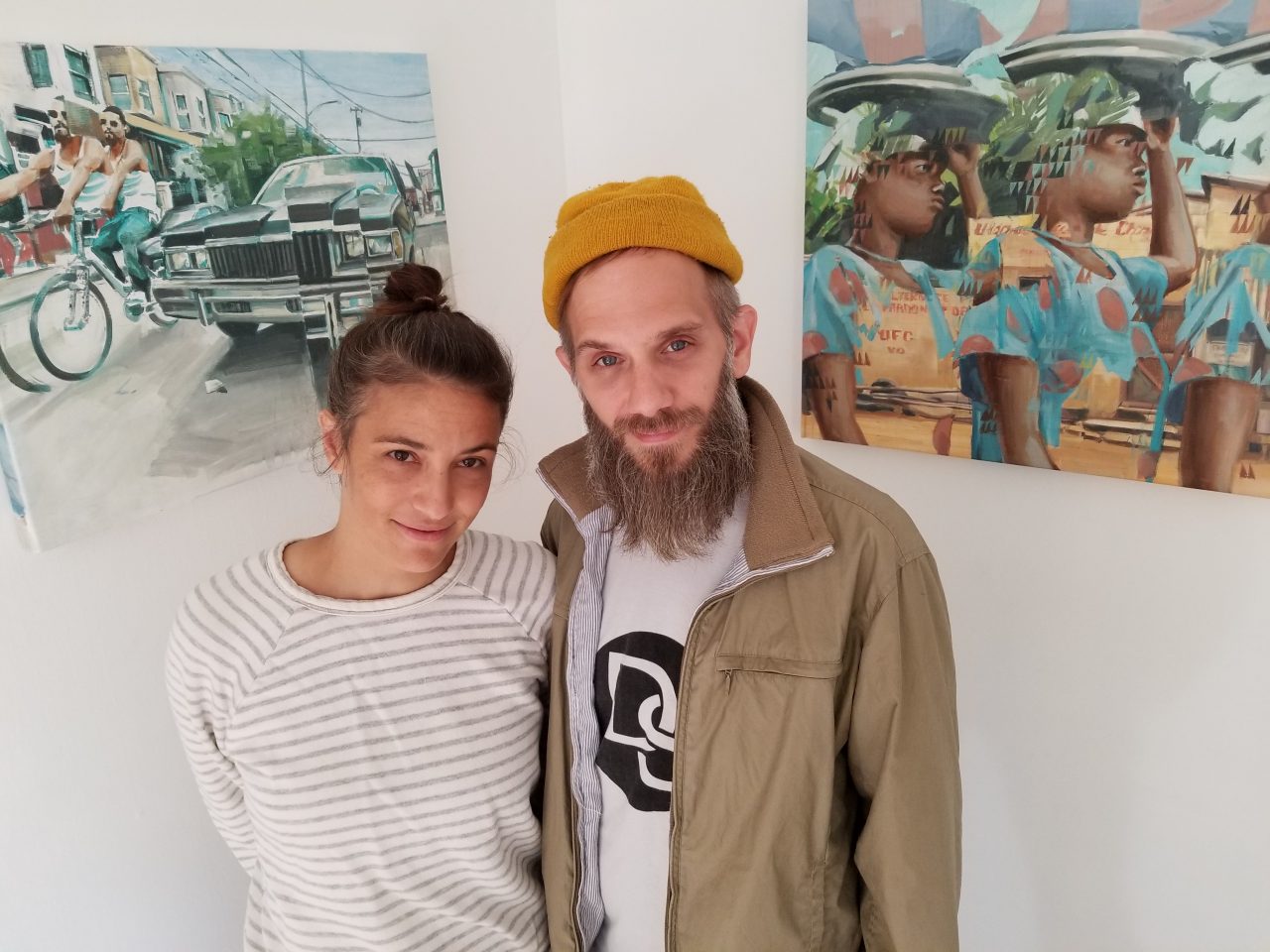 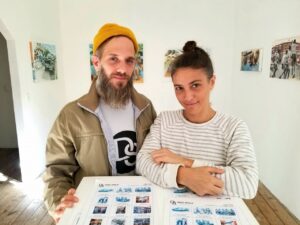 “Create a culture of collector”

It’s Friday night, a week before the next opening at the Deep Space Gallery. Jenna Geiger and her partner Keith VanPelt hunch over a macquete, or miniature model, from the gallery as they hang up the exhibit with tiny cutouts of the included paintings. “Jenna is very particular about the way the show hangs,” says Keith. “We do that a dozen times before settling on the flow. “

Deep Space Gallery stays off the beaten track in Jersey City in an uncrowded section of Bergen-Lafayette used more as a shortcut for frantic morning traffic than a route for traveling art vendors. Yet each opening reception fills the house with an eclectic group of patrons who come as much for the social scene as for the vibrant artwork. It’s a common complaint among gallery owners exhibiting trendy young artists who draw an enthusiastic crowd: all that was emptied from the gallery at the end of the night were the bowls of hummus.

Deep Space aspires to change all of that by presenting top artists with a wide range of prices for their work. “Anyone can be an art collector,” says Jenna. “I especially love when we inspired someone to buy their first piece of art.”

Jenna and Keith launched Deep Space in 2016 with one particular vision in mind: a place to present under-recognized artists in the best possible light. The gallery quickly established itself as a home for the works of graffiti artists and public murals as well as for the art of ascending painters and sculptors. About 50% of the artists featured here are local, residing in Jersey City, Newark, and New York, while the remaining half have traveled to other parts of the country or internationally. Jenna goes on to explain their mission, “We wanted this to be a place to properly host monthly shows, not a real estate business, restaurant, or office. It’s a gallery, something we thought Jersey City didn’t have enough of. As such, Deep Space has become not just a place to see a show and gobble up a few appetizers. but linger and really talk about art, invite speeches and celebrate the outside world existing within the walls of the gallery.

One of the many notable observations about Deep Space Gallery is that it successfully cultivates a culture of collector with its young patrons. “The act of buying and owning original works of art is an act of which we are proud. This is a meaningful, rewarding and culturally relevant transaction, ”says Jenna. “For people to be part of the creative atmosphere by supporting local artists, not just to hang something on their walls, but to be a true participant in creative culture, it can be life changing. “

This is why each show has a wide price range, so there are pieces available to everyone. The gallery is gradually shifting the paradigm from an often exclusive, perhaps intimidating, world to something that feels inclusive and collaborative. Keith continues: “The collector becomes a stakeholder in the artist’s development. It is not necessarily a financial thing, it is asserting for the artist to see that the audience stimulates the creative world of the artist.

Currently on display on the site, Ru8icon1 is an American who lives full time in Barcelona. He caught the attention of Keith and Jenna through the Mural Arts Philadelphia program and was particularly able to translate what he was doing onto canvas walls. He has participated in several group exhibitions at Deep Space, and this current installation is his second solo exhibition. Ru8icon1 is an example of the kind of artists who are drawn to the philosophy of deep space: a strong voice with cutting edge aesthetics. The goal of a typical Deep Space artist is never predictable. He or she can work with stained glass, relief collage, abstract, figurative or street art and graffiti, sometimes with a hidden identity in the manner of the artist Banksy. Yet the common thread is a young and talented creator whose voice is distinct and specific, like an oboe whose notes spring from the symphony while remaining consistent with the overall orchestration. 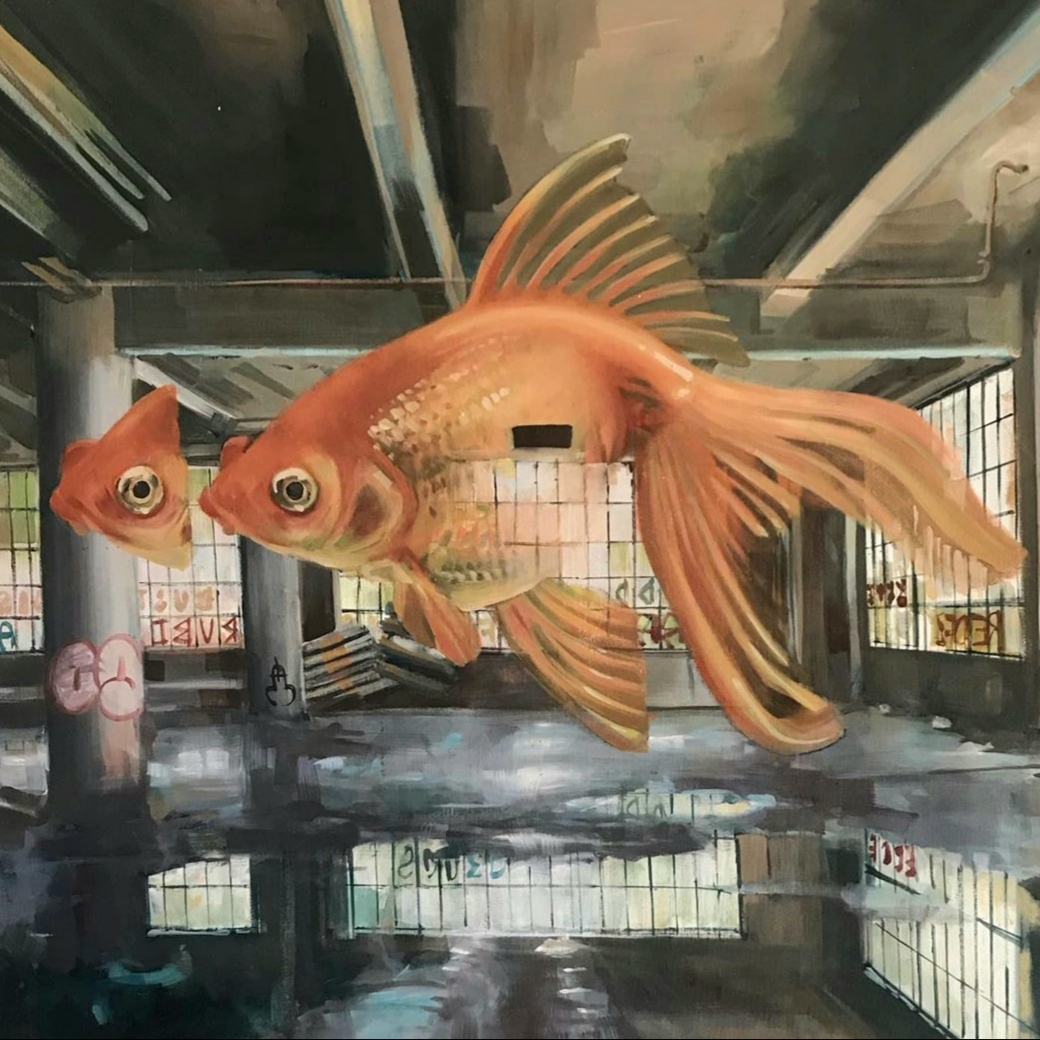