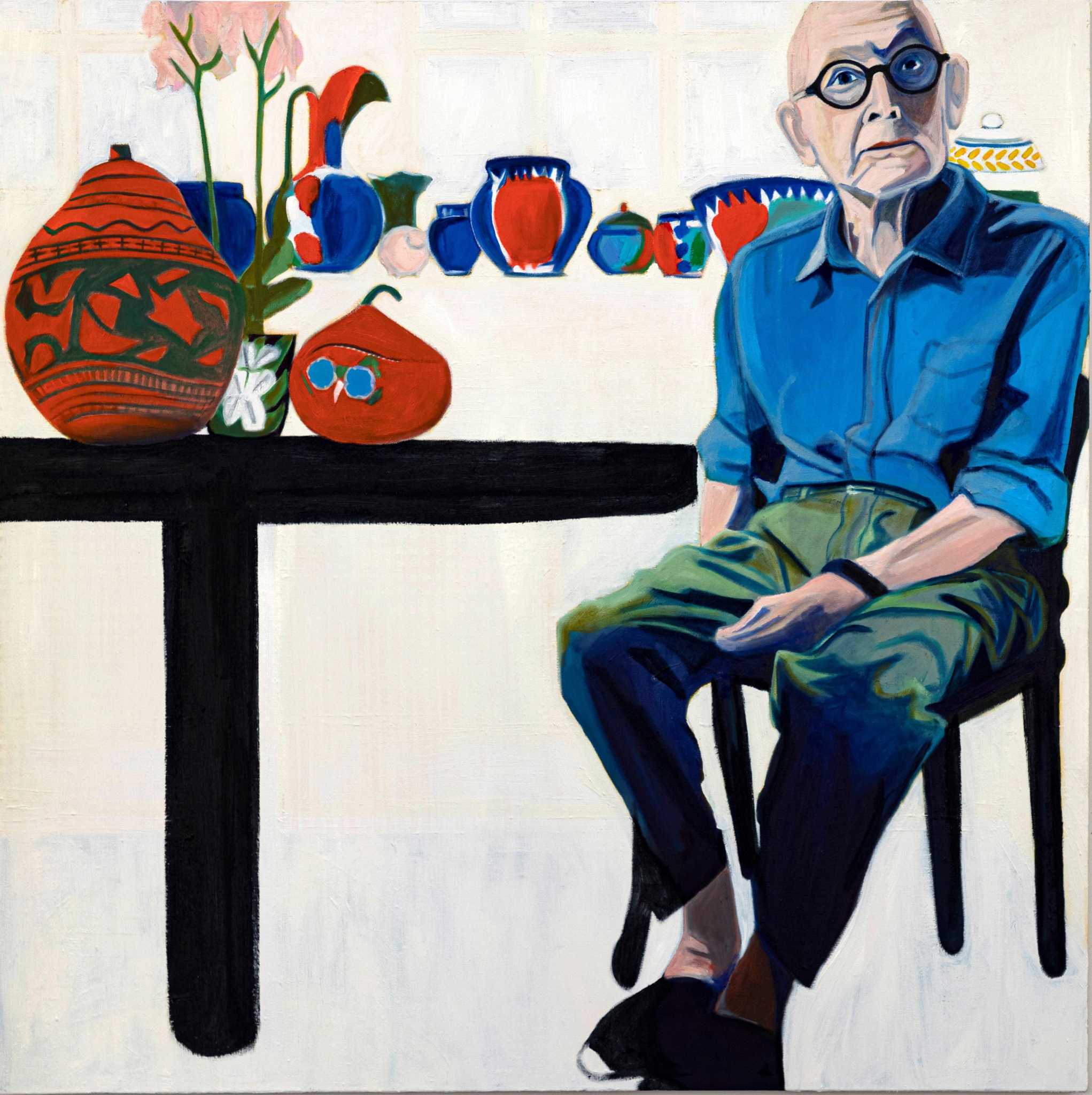 Sarah Fisher has produced several portraits of beloved Houston art collector Bill Lassiter, but “Delighted” is the only one she had to complete after her sudden death last February from a fall.

It is one of a number of paintings in her exhibition “The Second Yes” at the Front Gallery, which is somewhat of a room-sized self-portrait of an artist specializing in non-sentimental portraits and self-portraits. .

Fisher and curator / collector Clint Willour also appear in a few paintings. But it’s not about personalities. Alongside the larger canvases are starting photographs – images taken with her cell phone, as they are less intimidating to her subjects than a large production might be – as well as smaller drawings and paintings from the photographs. The artist reveals his approach.

“It makes them think,” says Fisher. His subjects tend to look directly at the camera. “It’s not really a look. It’s a fixed gaze, ”she adds. “I think it’s a look of confidence, which I admire.”

ON HOUSTONCHRONICLE.COM: Emma Balder Unveils Fabric of Life with Debut Show in Houston

Many artists work from photographs when they want to render subjects realistically. Fisher uses them differently, as initial studies whose elements she modifies as she develops a painted composition. Sometimes she adds elements – a block of yellow, for example, may appear, alluding to the mixed works she does with yellow dry-cleaning stickers. Most often she works reductionistically, painting the details.

“I’m always looking for opportunities to make the image more abstract,” she says. “It’s just a cool effect, and you can’t predict when it’s going to happen.”

It flattens or accentuates the shadows. Some of her studies do not have faces, and the faces she presents are clearly publicized; defined and recognizable but not realistic. She can make the skin appear intense or pale, outlining bodies in soft grays, yellows and almost turquoise with a background or using sharp black lines to pull them forward.

She also photographs the paintings in progress, in order to find her way back if she goes too far. “It’s only paint! I can repaint it, ”she says. “But you can never repaint it exactly the same way. “

“Nice to meet you,” Lassiter’s latest painting, took a while, she says. They had become friends. She photographed him in strong side light, sitting next to a table and a long window that held her collection of ceramics.

Through three painted studies, she changed the wall under the window from yellow and brown to red, then back to yellow and brown. The base of the table disappeared and reappeared. A large pot on the table turned red, then closer to its original brown, then red again. In the end, Fisher whitened everything except the man in his chair, his pottery (rendered in vivid oranges and blues) and the table. He’s nailed to the ground but all the scenery, with him in it, could also float.

Although her mother painted and Fisher always considered herself an artist, she had a career in advertising before starting to paint about 20 years ago. She hit her stride quite recently, spending two years in the Block program at the Glassell School of Art.

Like many other artists who paint figures, she started out with self-portraits because, well, she was available. She has painted herself over 100 times, in part because she feels more free to experiment when she is the subject. “I can go crazy on my own,” she said, “and that helps me manage my life. “

The most striking of the self-portraits in the exhibition hangs over the fireplace, some distance from the other rooms, suggesting how an artist might take a step back to determine whether a work is finished or not. Somewhat ghostly in the serene background of a bright room, the figure looks slightly downward, eyes wide open, thinking, in a way that says she might just gauge you too.

“Sarah Fisher: The Second Yes” is available until November 23 at the Front Gallery, 1412 Bonnie Brae; 3 p.m. to 5 p.m. on Saturday or by appointment; frontgallery.com.