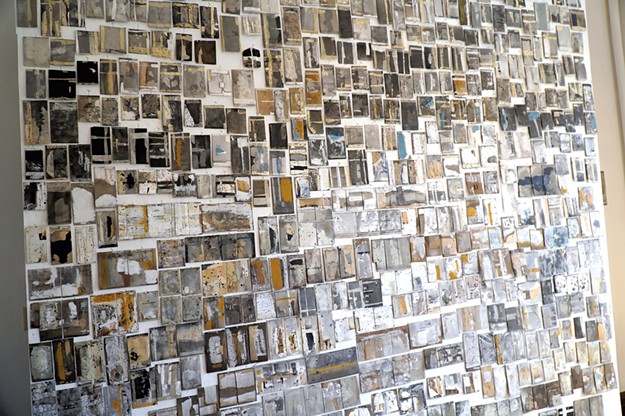 While some recent arts have reveled in an ex-pandemic ethos – there’s more to life than the misery of the past two years! — the current exposure to Susan Calza Gallery in Montpellier is a deeply felt struggle with loss, pandemic-related and otherwise.

“The Question of Loss: Holding Spaces” combines works on paper by Daryl Burnett of Montpellier with sculptures by the Middlesex artist Axel Stohlberg in the gallery jewel room at the front of a high-ceilinged Victorian.

It’s a beautiful duo of co-curators Calza and Kelly Holt and, surprisingly, a first for artists. Their works share both a palette – pale and dark, ranging from beige to gaping black – and a purpose.

The latter, for Stohlberg, is about somatizing feelings of personal loss, whether from the past, from a relationship that has ended, or from a recently deceased family member. Its gabled house forms of roughly hewn wooden blocks or hardware store cloth (aka chicken wire) are carved with eerily empty passageways, cuts and extensions – volumes of air that embody loss. Stohlberg’s sculptures speak as much of what is not there as of what is. 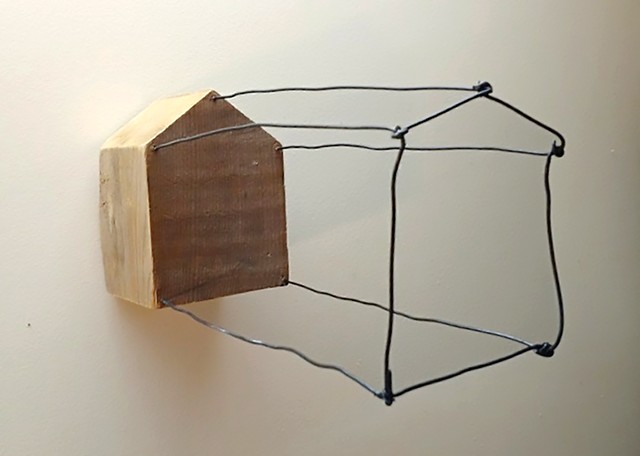 Above the gallery fireplace, “Memory” projects into the void, its wireframe silhouette of a house extending the simple form of the wooden plank attached to the wall. In Stohlberg’s “Shadow” series, each basic wooden block construction – usually two pieces joined at 90 degrees – bears the outline or shadow of a house that is missing. The outlines continue on the edges of the pieces, creating an impression of volume while signifying the absence.

In self-supporting constructions made of latticework, the expressed void is painfully visible. “An Empty Space”, a 15-inch tower, cannot hide the circular hamster wheel shape at its heart that encloses nothing but absence. “Untitled 3,” a 10-inch-tall hardware-cloth construction, is filled almost to its gable roof with stacked sheets of glass that catch the light; it is like a house flooded from the inside while a viewer gazes in fascination from the outside.

The opposite effect is achieved in Stohlberg’s freestanding wooden houses painted with black gesso, such as “Untitled #5”. The incessant flatness of the painting has the effect of making the work inaccessible, opaque. The same gesso highlights the cut wound of “Untitled”, a block of natural wood hanging on the wall with its lower left quarter missing.

Stohlberg, 71, former director and founder of Axel’s Frame Shop and Gallery in Waterbury, has been practicing the art for decades. His drawings and sculptures have long evoked the shape of a gabled house. Previously, however, the trope represented to him something “that we can all relate to, a dwelling, a nest,” Stohlberg said over the phone.

“For years, form was a thing of comfort,” he explained. “The loss was new to me.”

While Stohlberg’s losses are varied, Burtnett’s work focuses on those lost to COVID-19. His installation, “Gratitude in a Time of Loss, #1-611,” is a breathtaking tribute to Vermonters who have died from the virus. Two small works hung alongside, “The Uncounted 1” and “2”, commemorate the homeless and others whose deaths from COVID-19 have not been counted. (These two are for sale, the installation is not.)

“Gratitude” consists of 611 vertical rectangles the size of a sheet of folded paper or parchment modified with tape, ink and acrylic paint, individually pinned to a freestanding wall. Listed in chronological order, each represents a death in the first two years of the pandemic.

Burtnett, 64, mainly practiced photography until five years ago. He started making the paper packs in March 2020 using washi paper and archival tape and dipping them in a developing tray filled with sumi ink. He had done about 20 before realizing he was creating abstract compositions in response to the Vermont death count. They became a “comfort,” he wrote in his artist statement, and a way to stay in touch with the dead and their families, despite not knowing them.

As the project continued, Burtnett replaced the washi with used parchment paper a friend had given him after baking the challah. He said he liked the way the ink beads up on the tape. Eventually he added pigments to the set and experimented with graphite lines on some pieces.

Each package is unique, like the person whose death it commemorates. Some are shaped like a triptych, representing days in which three deaths occurred in the state.

“I think part of what drove me to create these pieces was to not stand alone watching a tragedy unfold — to do more than just despair,” Burtnett explained in a phone call.

He added, “I live alone. I’m very isolated. I was just worried everyone would be so isolated.” 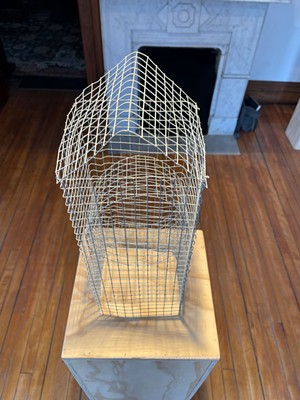 As more Vermonters succumbed to the virus, Burtnett continued his tributes; these are stacked and propped up on the chimney next to the installation, available for viewers to pick up, study and turn over. (They are finished on both sides.) He recently finished #630.

Burtnett continues to use the same dipping tray, replenishing it but never emptying it. If the platter reminded some viewers of a baptismal font, the tape on some packages appears to make a cross, and the yellow pigment recalls the gold leaf of religious iconography, it’s all accidental, the artist says. . But, he added, “I invite viewers to see whatever brings comfort and meaning to them.”

Burtnett said he only knew one person who died of COVID-19, but had touched on it himself.

“I had COVID very badly, from the start. It was scary, actually,” he recalls. “I think that played into this project. I’m lucky, you know?” m