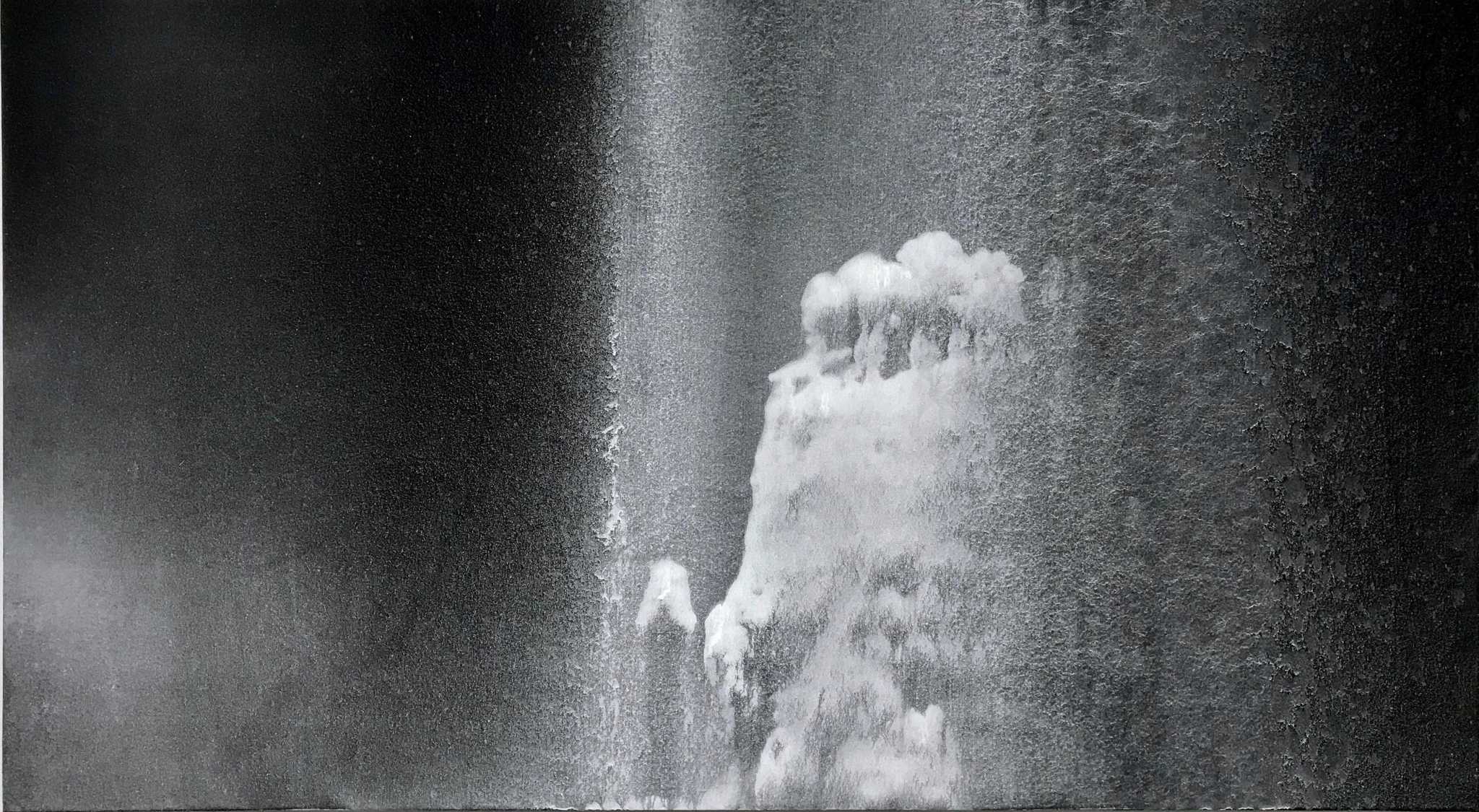 The paintings in New York artist Amie Siegel’s exhibition at The Blaffer are marvels of illusion. They look like they could have been copied from brightly lit photographs of icebergs or geysers in a dramatic moment of rupture. If these white crystals had been rendered by hand, you might wonder how the artist achieved such a blend of realistic imagery and texture depth with a material that washes the canvas like mud.

The truth about these works turns out to be more startling: Siegel’s linen canvases contain a sort of record, collected through the chance accumulations of marble dust as it flew from the cutters’ blades in a Danby quarry, in Vermont. Scrap marble is both the subject and substance of these masterpieces of machinery.

In an adjacent gallery, the first part of Siegel’s 34-minute HD video “Quarry,” which is showing for the first time in the United States, takes viewers into the cavernous underground quarry where this machinery lives, with its flooded caves and its cutting rooms. His slow panoramic technique, performed with a sliding carriage, absorbs the landscape from a perspective so stable and constant that you have the strange feeling of being both integrated and detached.

Stick to it, and the camera resurfaces in the New York skyline, showing the fruits of career’s hard work in the glossy, hard surfaces of minimalist interiors in impossibly high-rise apartment designs sophisticated. (For what it’s worth, many Houstonians are also familiar with this marble: the vertically ridged walls of the Menil Drawing Institute’s bathroom walls and the artfully placed boulders in its courtyards were from the Danby Quarry.)

Siegel slyly edits super-smooth digital animations in the built environment sequences, and it’s virtually impossible to tell the real from the imagined. The final scenes of an unfinished building envelope highlight the vacant spirit of a society obsessed with luxury.

The show’s title, “Medium Cool”, is a strong reference to the material feel of marble, Siegel’s almost forensic eye, and 1960s philosopher Marshall McLuhan’s ideas about “cool media” forms of communication. whose broader meaning is not obvious. Filling every gallery in the museum, it includes the “Dynasty” installation, built around a small marble fragment from Trump Tower (meh) that Siegel bought on eBay during the 2016 presidential election; and “Fetish,” a riveting 10-minute film about the meticulous dusting and deep cleaning of small antiques and the patient’s couch at the Freud Museum in London.

Former Blaffer director Toby Kamps, who curated the exhibition, suggests in a brochure that the works convey “a psychological and economic narrative of late-stage contemporary capitalism – an age of social stratification, conspicuous consumption and displacement work by mechanization”.

Each piece is quietly subversive and the overall temperature is just right.

2019-06-04
Previous Post: Local studio unveils public artwork at OhioHealth
Next Post: This piece of performance art is served with savory bowls of hot curry | At the Smithsonian