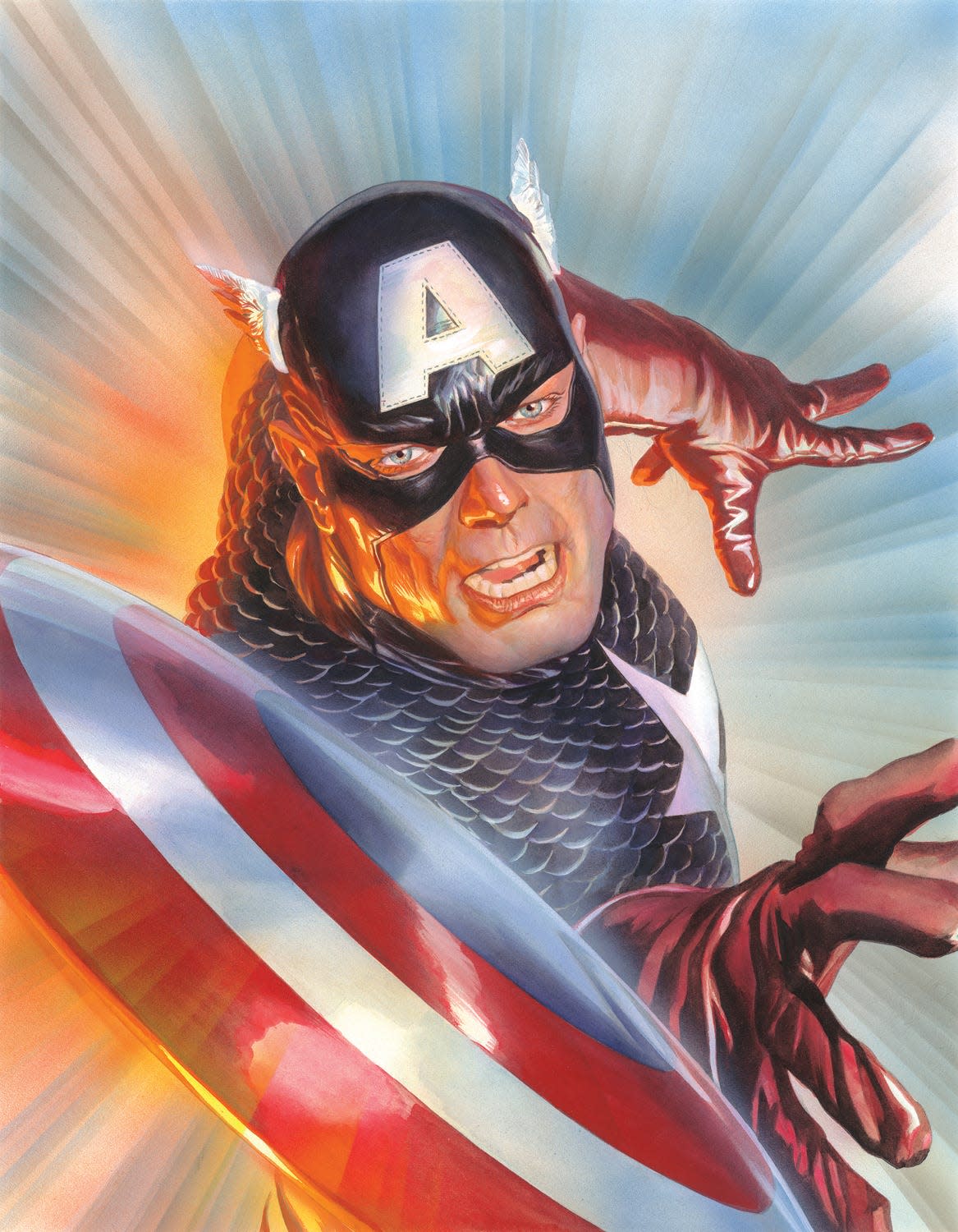 We are a celebrity driven company. We are held captive by the star factor that we imagine we see before us in everyone, from the people we elect to public office to our sports stars, singers and actors.

Superheroes, while obviously different from people in real life, are held in the same esteem as the celebrities we hold dear. There’s something approachable about these supposedly fantastic people that feel out of reach and relatable at the same time. It’s this relativity that makes our superhero worlds so viable and successful.

“Marvelocity: The Art of Alex Ross,” on display at the Canton Museum of Art, is an exhibition of more than 50 works that highlights the life and career of what many consider to be the most talented artist of his genre. Using a photorealistic style, Ross has illustrated many characters, including Spider-Man, Captain America, Iron Man, Storm from the X-Men, the Avengers, Black Panther and many more.

It is the artist’s skill in a photorealistic style that helps make this exhibition so accessible. It is also the choice to include works made by the artist as he was growing up that helps transform this exhibition into something that informs you and gives you clues about Ross’s love for his chosen subject and how he developed and changed throughout his life.

The curators of this exhibition have chosen to include not only drawings and creations from the artist’s childhood, but also a handful of storyboards and sketches throughout the entirety of the exhibition. This important choice offers us the opportunity to better understand the artistic process and to see firsthand the amount of work and effort it takes to develop such a refined style.

Due to his style, Ross has been compared to artist Norman Rockwell. Looking through this exhibition it is easy to see why, although Rockwell often makes cutting commentary through his compositions and sometimes shows his ability to paint in other styles through his chosen subject. This type of artistic decision-making is not exhibited here. However, what is on display is a unique ability to create compositions full of movement and detail at the same time – a skill too often overlooked or at the very least taken for granted.

“Dr. Strange, Marvel City Cover” is a gouache that is a close-up of the doctor, his hands, his face, and his amulet. In the painting, the subject raises his hands, casting a spell with his cape flying directly behind him. The painting is done in warm golden colors with purples and reds. The work is also done in stunning detail. It’s as if you can hear the sound of the subjects’ clothes and the swirling wind that makes Dr. Strange appear as he does. It’s this kind of ‘accuracy’ that helps tell the stories the artists paint on and also helps make this collection of works more portable.

“Falcon,” another gouache, features the character best known to have appeared in a series of Captain America films. Falcon is also the first mainstream African-American comic book superhero. In this painting, they fly through the air with a look of concentration so serious on their face that it approaches with a grimace. Hands are outstretched in front of them and the blue sky and clouds are depicted behind them such that you get a sense of the character’s movement and speed as it flies. It’s a job well done that exudes beauty, confidence, and the overall personality of this character.

“Prince Namor The Sub-Mariner” is a painting of an important historical Marvel character who was introduced in 1939. This character is the mutant son of a human captain and a princess from the mythical undersea kingdom of Atlantis. In this painting, the artist has chosen to make a close-up of the character’s face. Here we get Ross’ interpretation of the characters’ features, stern gaze, and pointy ears. We also get a sense of the “attitude” of Namor, who has also been mentioned and used as an angry, albeit “mostly good-natured” anti-hero.

“Marvelocity: The Art of Alex Ross” is basically an accessible exhibition that all lovers of realistic painting and universe/superhero universe should enjoy. Ross’ talent for making works that portray characters and their personalities in a photorealistic way is impressive and worth this opportunity to see it.

Exposure: “The Art of Alex Ross” until March 6

Admission: $8 for adults and $6 for seniors, students and military veterans. Children 12 and under are free. Admission is free for every Thursday and the first Friday of each month

To note: Visitors are required to wear masks