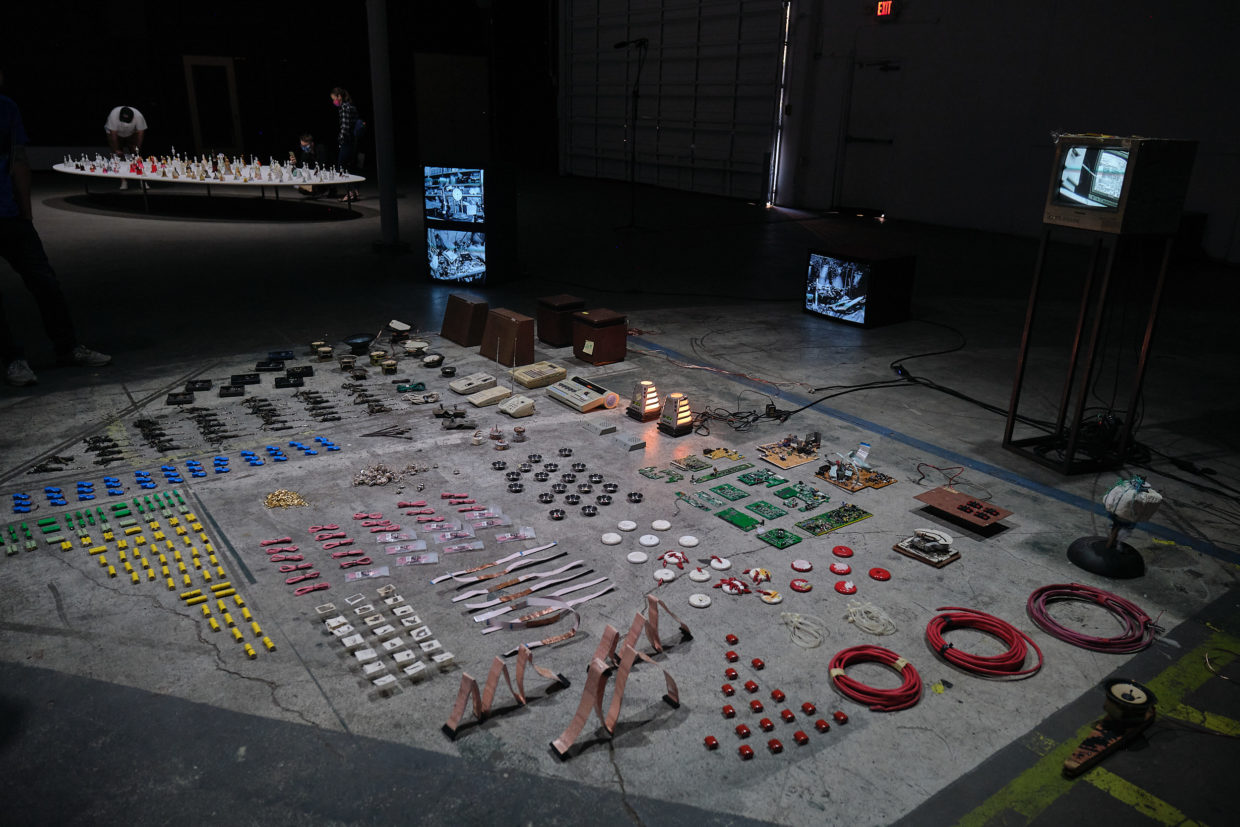 A letter from the souls of the dead silently points in several directions at once. This exhibition by Aki Onda (they / them), artist and composer currently based in Japan, opened at Portland Institute of Contemporary Art July 10 to an enthusiastic audience. Masked attendees filled her warehouse to watch Onda and several local artists play with the exhibit’s iconic decorative handbells, an offering Onda described as “a little ritual to activate works and inject energy into space”.

I had the opportunity to preview the exhibit and speak with Onda and curator Kristan Kennedy (her / her) before the opening. Towards the start of our chat, as we were talking about childhood memories, Onda waved towards the PICA warehouse and said: “This is our church. “

A letter from the souls of the dead takes on the resemblance of a sacred environment. In addition to a multitude of bells, the exhibit includes old technology from an electronics store as well as images from vintage tapes. Onda’s thoughtful layout of this ephemeral invites awareness of the memory and energy that lives between and beyond it all. Most of the materials in the exhibition come from earlier works by Onda. Kennedy aptly described it as a “collection of collections,” which came together through Onda’s mix of intuition and intention. “There are a lot of decisions made in advance, a lot of careful planning, but there is also a lot of room for openness” Kennedy recalled the process.

Kennedy and Onda know each other for over a decade, and they have fueled the spark of this collaboration since 2009. The title of the exhibition, A letter from the souls of the dead, came before the pandemic hit and carries a predictive connotation given the past year of huge losses. Its varied microcosms seem linked by the phantom of a palpable logic. Onda likened their installation pieces to “dead creatures”, who have a life that can be brought back. “It’s really a matter of energy control,” they reflected.

Right at the entrance to the exhibition, visitors will find three oval tables covered with decorative bells. The bells sparkle under spotlights, each as special as the next, forming a topography that blurs the boundaries between their similarities and their differences. From their resting place to the opening of the exhibition, the bells channel many possibilities thanks to stillness. They are suggestive conduits, drawing visitors inward and inviting attention to the details of the exhibition as a whole.

Just after the islands of bells, a treasure of various materials lies on the ground. Onda got all of these items from Argo Electronics, a now defunct New York store frequented by artists. This collection appears to be ordered into microcosms of resemblance: speakers, batteries, motherboards, lights, wires connected and disconnected from power sources, and even old televisions showing black-and-white documentary-style images of the store shot by a Brooklyn-based artist and Onda’s collaborator, Moko Fukuyama.

The installation, titled Shopping at Argo, draws attention to its interaction with the marks and scuffs on the floor of the PICA, indicating whatever has been left there. As an elevated installation, it honors the obscure role Argo has played in the great ecosystem of art. To collect and store “garbage cans” (whether to save or to sell) may seem futile or even pathological to some, but these acts always belie intuition.

“I’ve kind of used to collecting since I was a kid,” Onda shared, providing context for their work. “It is something natural to me.” They continued, “I have traveled a lot as an artist. So every time I go there, I end up going to a thrift store, flea market, or antique store, or I can find something interesting on the street. These things naturally add up and they start to mean something to me.

Onda expressed her fascination with the connection between spirits and matter and the notion of communion with the spirits of the dead. In a way, their habit of collecting makes room for these possibilities to emerge. They described the organic build-up of their collections without much intention, until at some point an intention made itself known. “I’m starting to realize what I want to do,” Onda said of this process. “It’s almost like, to me, hearing what they say. . . it’s really like a conversation.

Towards the back of the exhibition, two vintage projectors scroll through the slides on a back wall. The sepia tint of the slides is a subtle interjection into the darkness at the edges of the space. Thick beams of light extend from the spotlights towards a wall, recalling spirits that could easily pass through it. The projections present images of tapes that Onda has methodically extracted from various cassettes. They offer a point of continuity with the adjacent work of Onda.

Beside the spotlights, a giant piece of ghostly cloth hangs from the ceiling. It’s covered with distorted black and white images from Onda’s cassette collection. The light passes through the fabric from above, drawing attention upwards. Nearby, a series of enlarged cassettes, which have been flattened into adhesives, crawl along the walls. The cassettes are covered with dynamic collages of stickers and images of Onda, signifying the imaginative space of the deep internal worlds. They feel like animists, like faces with hollow eyes peering out of the wall.

The sound emanates from this corner of space – a Zach Rowden composition made from Onda’s cassette recordings and contributions from Charmaine Lee. The tones follow one another and dissipate, infusing texture and mystery. Every aspect of Onda’s work seems to involve a level of rearrangement or manipulation.

On a nearby pedestal are a series of old music players. Although they are arranged in rows based on their brand similarities, many have stickers or some sort of marker that subtly differentiates them. Their organization is reminiscent of cemetery headstones – rows of uniform structures that serve the common purpose of remembering many different pasts.

Onda’s habit of recording sounds on cassettes has long intrigued Kennedy. She described Onda pulling out a tape recorder and making recordings at PICA many years ago after they first met. According to Kennedy’s estimate, the materials Onda chooses to work with are “more organic than we think.” She added: “A lot of things around us, we don’t really recognize that they’ve taken on a human patina.”

For Onda, the permanent practice of sound recording on cassettes has become a therapeutic means of remembering and confronting the experience of life. In a previous interview with Kennedy about the exhibit, Onda said, “At some point I start to block out my memories to avoid looking back. I suffered from memory loss, depression, and a series of panic attacks for a few years. But Onda’s practice of tape recording allowed them to archive their experience with a looser take.

They described to me how recorded sounds and their meanings change over time, correlating with the subjectivity of human memory. “You can modify or further manipulate your memory,” they explained. “We humans, in a sense, manipulate our memory a lot. Basically, we remember as we want.

Reflecting on my own memory of A letter from the souls of the dead, I realized that each of Onda’s collections functioned as a metaphor to illustrate the simultaneous compartmentalization and continuity of the entire exhibition, as a collection of collections. Each collection has its place of affinity. Each contains infinite nuances, and each leaves space for observation and contemplation between its material components. But speaking with Onda, I got the impression that this interpretation might not be the way they think about their work. In fact, there really is no rush in deciding what these collections have to say.

The text of the exhibition written by Onda for Collage on cassettes concludes with the following sentiment:

“To be trapped in the past is a bitter fate, and nostalgia is a sweet refuge. I publish these documentations, as fictitious as they are, like arrows flying into the future.

While Onda’s collections could be interpreted as sentimental or even political, their work is a reminder that this philosophy also stems from natural ways of being and doing. The materials Onda collects have a close connection with life, history and human bodies. They always ask for care and attention and call back with messages for those who are willing to listen.

A letter from the souls of the dead is on view at the Portland Institute for Contemporary Art through September 4.

2021-08-04
Previous Post: Gallery at the Art Shop
Next Post: Everything is connected in ‘Interwebbing’ at Akron Soul Train