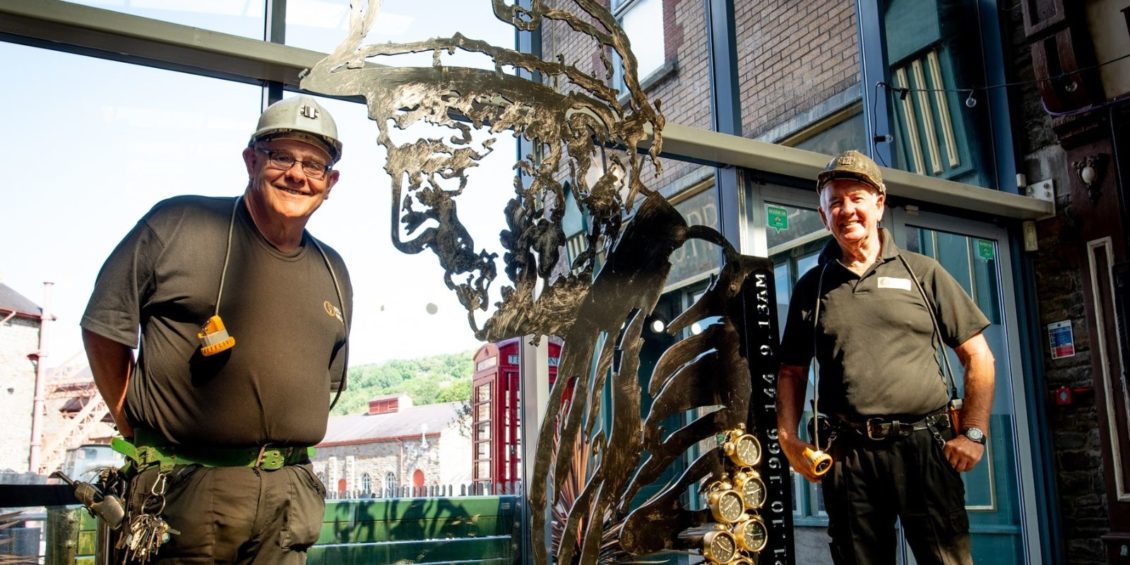 The magnificent Aberfan memorial created by renowned local artist Nathan Wyburn will become a permanent feature of A Welsh Coal Mining Experience at Rhondda Heritage Park, it has been confirmed.

The sculpture was created by Nathan as part of Sky TV’s Landmark programme, in which artists were tasked with creating a piece that reflects their nation.

Nathan created “21.10.1966 144 9.13am”, named in reference to the date and time of the Aberfan disaster, and the number of people who were killed when a coal mine collapsed on the village that day.

The piece was created from concrete and steel and features 144 clocks, each stopped at 9.13am in a poignant memorial to those who lost their lives in the disaster. It was on temporary display at A Welsh Coal Mining Experience for over a year.

It has now been confirmed that the memorial will remain at A Welsh Coal Mining Experience, a fitting location for such a poignant mining statement.

A Welsh Coal Mining Experience is built on the site of the former Lewis Merthyr colliery and many of the original features and fittings of the mine remain in place.

The guides who lead the Black Gold Underground Experience tour are former miners themselves, working in the Rhondda coal mines since childhood.

Guests arriving at A Welsh Coal Mining Experience can take time to view the sculpture upon arrival. On-site exhibits and presentations explore life in the days of coal mining, explaining the importance of coal and how it powered the world.

The courtyard features the original workings of the mine, including coal barrels and the Andersen War Shelter. There’s also The Forge exhibit, exploring the role of the mine blacksmith and the horses that helped the miners.

The main feature is the Black Gold Underground Experience Tour. Meet the men who worked in our mines when they were children. Put on your miner’s helmet and join them on a journey underground and through time, where they will share their personal stories and memories with you. Dare to ride DRAM! a simulated route to the “surface” of the mine.

“It remains a tragedy we will never forget and Wales keeps silent every year to remember those affected by that tragic morning.

“As a place firmly rooted in coal mining, in the heart of what was one of the most heavily mined areas in the world, it’s only fitting that the memorial is there for people to see. Rhondda Cynon Taf has suffered thousands of tragic losses from mining disasters and so we have a connection to Aberfan.