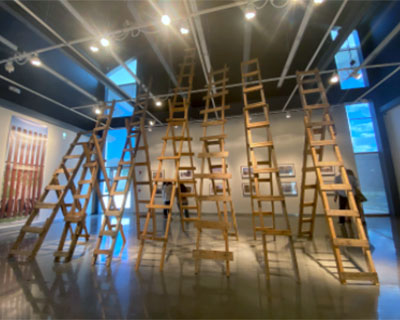 A work of art on immigration – AC Observer

A graduate of Austin College, Scott Nicol exhibits his art at the Dennis Gallery of the Forster Art Complex. His work compiles images from various border scenes in South Texas. Nicol also presents the ladders that were thrown over the border wall. On Saturday October 23, Nicol organized a magnificent reception which I had the pleasure of attending. While there, Nicol shed light on his experiences on the wall and the scenarios he witnessed. I will include some of my personal favorites in this article.

When you look closely you see that these ladders are made by hand. The artist explained to me that these ladders are often constructed from offcuts that people find around the border in the streets and are often thrown after unsuccessful attempts to climb the border walls. In a way, the “ladders” could represent how far people will seek refuge from violence and poverty.

These elements are combined with beeswax. The bottom of this room, under beeswax, appears to resemble diagrams of the wall. When I was there at the reception, the artist kindly let me touch the artwork. The wax was hard and strong, the pieces of the wall were firmly in place. This could be done to represent the shared history of these scales and reflect the current political climate in response to the complex US position on immigration.

Deterrence is another of the smaller hanging ladders. This sculpture includes pieces of barbed wire from the top of the wall, children’s toys and shoes, a tag and a Ziploc bag containing a map of the Virgin Mary. Behind the beeswax are three portraits of a boy. The children’s toy, a small yellow helicopter and is attached to the ladder by a thin black string. These objects show the innocence of a child’s toys and the shocking reality of the barbed wire on the border wall. It can be inferred that people who cross the border do so with their young children. They may even cross over to help their children live fulfilling lives full of opportunity. However, they are dissuaded from crossing what is depicted through the barbed wire.

In the room Relics, a piece of the berlin wall is presented in a small box above the box is a small display light similar to those used in museums. Above the Berlin Wall display there is a piece of the border wall in the same display case and a small light. This can be interpreted as a commentary on how the border wall unfairly separates Mexico and the United States. This sculpture could also represent the historical significance of the Berlin Wall and now the Border Wall.

This showcase beautifully addresses the border wall conflict as well as the failure of the United States to resolve our immigration issues. If you can go and visit this exhibition, I beg you.