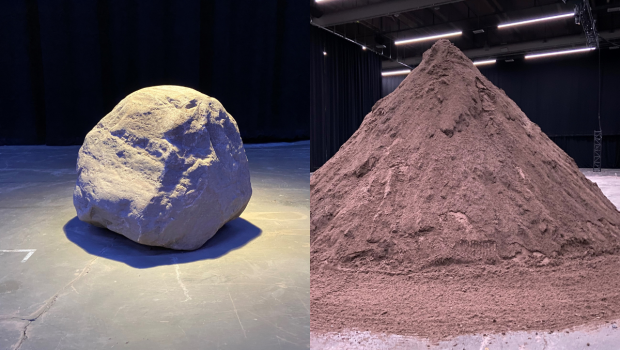 MONTREAL – It’s a show about life and death.

Based on the Greek myth “Sisyphus”, Montreal artist Victor Pilon will shovel 300 tonnes of sand at the Olympic Stadium.

It is a modern study of the absurdity and repetition of life, based on an old legend.

For angering Zeus, king of the gods, Sisyphus, a mere mortal, was condemned to a repetitive task for eternity: pushing a boulder up a mountain every day, just to see it come down again.

Pilon traded the rock for sand.

“I thought to myself, ‘If Sisyphus pushes this rock up the mountain and it comes down and shatters and shatters forever, what will become of it? Sand, ‘”he said.

As of September 28, Pilon will shovel the equivalent of 300 tonnes of sand across the East Hall of the Olympic Stadium. It will take a month.

The only shovel he’ll use contains a microphone, so the audience will hear and see every scoop.

“The shovel can be shared with others and I will see if they are ready to become Sisyphus, and be part of the experience of the absurd because it’s totally absurd: to do something that does not end and accomplishes nothing, “he said.

The spark of this project was the death of Pilon’s longtime partner, who died in a car crash.

He knows he will suffer while shoveling, but not as much as he has been since Sylvain’s death.

Pilon said his plan touched others who have lost loved ones.

A Big O employee approached him with her story.

“It helps me get through my grief,” she told Pilon. “I lost my child a few months ago.”

While people are watching, he wants them to think too.

“This is a wake-up call: what do I want to do with my life,” he said. “Do I want to travel every day to go to work, what’s the point? What’s the meaning? The piece will be more contemplation, reflection, questioning and introspection.”

He added that the timeliness of the play is important.

“I think COVID also reminded us of the essence of life,” he said. “When I’m in pain. When I’m in anguish and insecurity. I’ll think of them.”

The show starts Tuesday at noon and is free although a vaccination passport is required for entry.