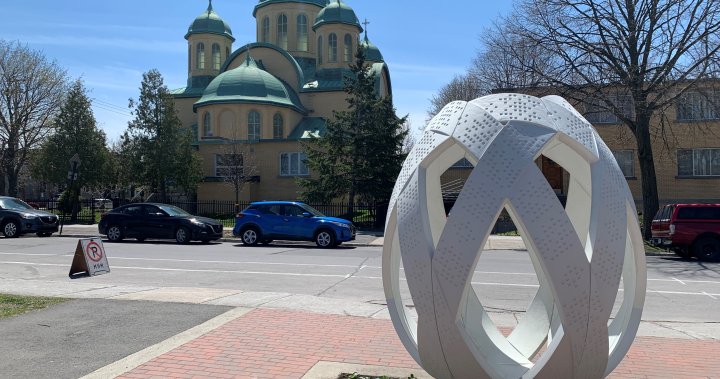 The City of Montreal unveiled Friday morning its brand new work of public art commissioned to pay tribute to the Ukrainian community of Montreal. Although the sculpture was chosen before the Russian invasion of Ukraine, it now has an even deeper meaning for Ukrainians living in Montreal.

Artist Giorgia Volpe was inspired by the interwoven open ribbon sculpture form of the pysanka, a Ukrainian Easter egg.

“I try to interpret this symbol and make it like an interlacing. To meet, to open up, to open up to the past but to the future,” said artist Giorgia Volpe.

The piece, titled interlacing, is inspired by traditions passed down from generation to generation. Volpe designed it following consultations with the Ukrainian community, present at the inauguration on Friday.

In a crumbling Ukrainian village, only stranded old people remain

“It’s the treasure of Ukrainian culture,” said Rosie Chomyk, an 89-year-old Ukrainian who moved to Montreal at the age of 16.

“There was a custom that the girl always gave the boy for Easter.”

The work located in Ukraine Park in the Rosemont–La Petite-Patrie borough was commissioned in 2020 to highlight the presence of Ukrainians in the community for over 100 years.

“It’s a great gift that the city and art give back to the Ukrainian community,” said Eugene Czolij, Honorary Consul of Ukraine in Montreal.

With the ongoing war in Ukraine, Czolij said the gift meant even more as they fought for their country.

“This pysanka at Easter celebrations around the world was exchanged by Ukrainians, including Ukrainian soldiers, as a message of hope that Ukraine will also rise again, also renew itself,” he said.

The egg is in front of the Hagia Sophia Ukrainian Orthodox Church, where volunteers are collecting donations for refugees arriving in Montreal. Czolij said the sculpture is a welcome reminder of the home.

“It’s very heartwarming for someone coming from war,” he told Global News.

A reminder, that Ukrainian traditions and culture will also prevail.

“Something like that is the biggest thing, because now I think the whole world knows who Ukraine is,” Chomyk said.