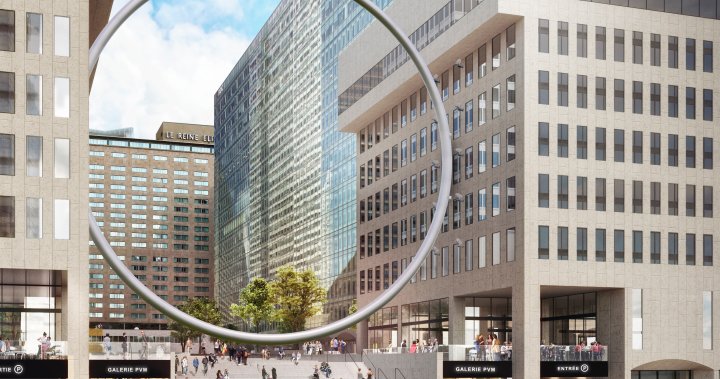 A massive new “Ring” artwork will be installed in downtown Montreal

Measuring 30 meters in diameter and weighing some 50,000 pounds, “The Ring” will fly over the stairs of the Esplanade of Place Ville Marie.

The project was commissioned by the real estate company Ivanhoé Cambridge and designed by the architectural firm Claude Cormier.

“The goal is really to attract all kinds of people, everyone. We want to have a truly lively and dynamic downtown,” said Vice-President of the Quebec City office of Ivanhoé Cambridge, Annik Desmarteau.

Preliminary work is already underway on the steel structure, which will be suspended between two buildings.

Desmarteau said the ring overlooking McGill College Avenue and Mount Royal is designed as a gateway to downtown.

“It’s business, it’s tourism, it’s shopping, it’s people living. It’s the heart of Montreal where there is a beautiful energy,” said Claude Cormier, lead architect and designer of the project.

The goal of this towering work of art is to beautify the face of Montreal while bringing new vibrancy, vitality and appeal to the heart of the city, Cormier said, while showcasing the city’s rich history.

“In a bold and sustainable move for downtown Montreal, the ring is part of the emblematic axis of Avenue McGill College, where Place Ville Marie, McGill University, the former Royal Victoria Hospital and Mount Royal Park line up, revealing more than 200 years of history of our city,” said Cormier.

Tourisme Montreal, the Government of Quebec and the Board of Trade of Metropolitan Montreal are among the backers of the $5 million project that aims to revitalize downtown by bringing people back downtown.

“Montreal and its downtown are catalysts for the Quebec economy. The business, cultural and tourist communities have acted quickly to bring life back to the heart of our metropolis,” declared Chantal Rouleau, Minister responsible for the metropolis and the Montreal region.

“A monumental installation like The Ring will have the power to attract visitors and will crown all the efforts made over the past two years.”

Cormier says the ring will be illuminated when completed and should be erected in June.

The Ring will be assembled on site.

It will be heated to prevent ice buildup in winter and will have vibration dampers for strong winds and potential earthquakes.

A major unveiling to the public is planned for the month of September.